A Florist That Stands the Test of Time 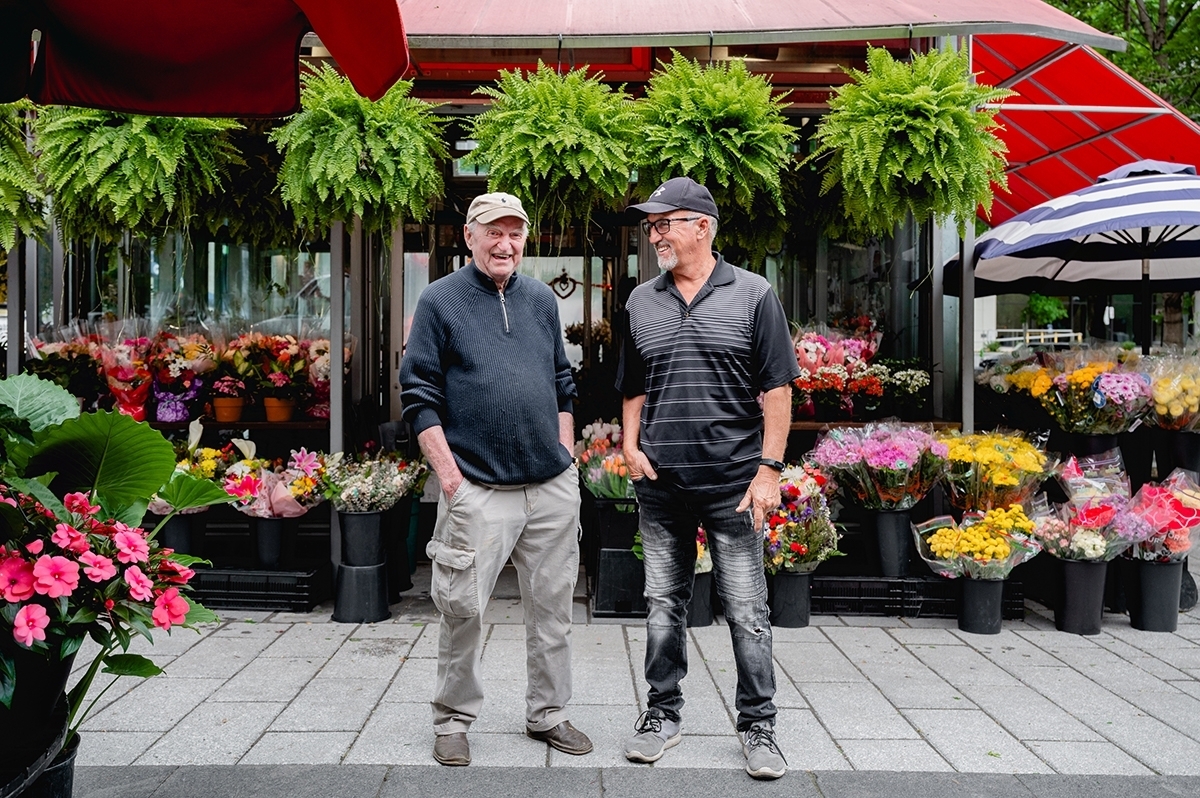 “Is Gilles still here?” customers sometimes ask. Gilles Duchesne, or “Monsieur Gilles” as his partner Gerry Desjardins calls him, is a 91-year-old florist who has been running the kiosk bearing his name outside the Square-Victoria-OACI metro station for the last 35 years. “Or 36, I don’t remember,” he says. Yes, Gilles is still there!

The two florists’ personality – they’ve been working together for 52 years! – is truly contrasting. Gerry, soon to turn 64, is calm and collected and talks in a whispering tone while Gilles has an infectious laugh, speaks loudly and says absolutely everything that comes through his mind. What unites them is their love of flowers and of a job well done. A third florist, Mr. Champagne, 80 years old, comes to give them a hand during the high season.

Floristry is a family affair for both of them. “Even our family names have to do with gardens!” says Gerry Desjardins with a smile. Desjardins started working in flowers at the age of 12 when his father had a flower stand in Montréal. Even when he was a full-time foreman for the city, he also worked at his “Uncle” flower stand – that’s how he calls Monsieur Gilles even though they’re not related. As for Gilles Duchesne, he’s been a florist “for 100 years”, according to his calculations. Might as well say he’s been a florist forever! 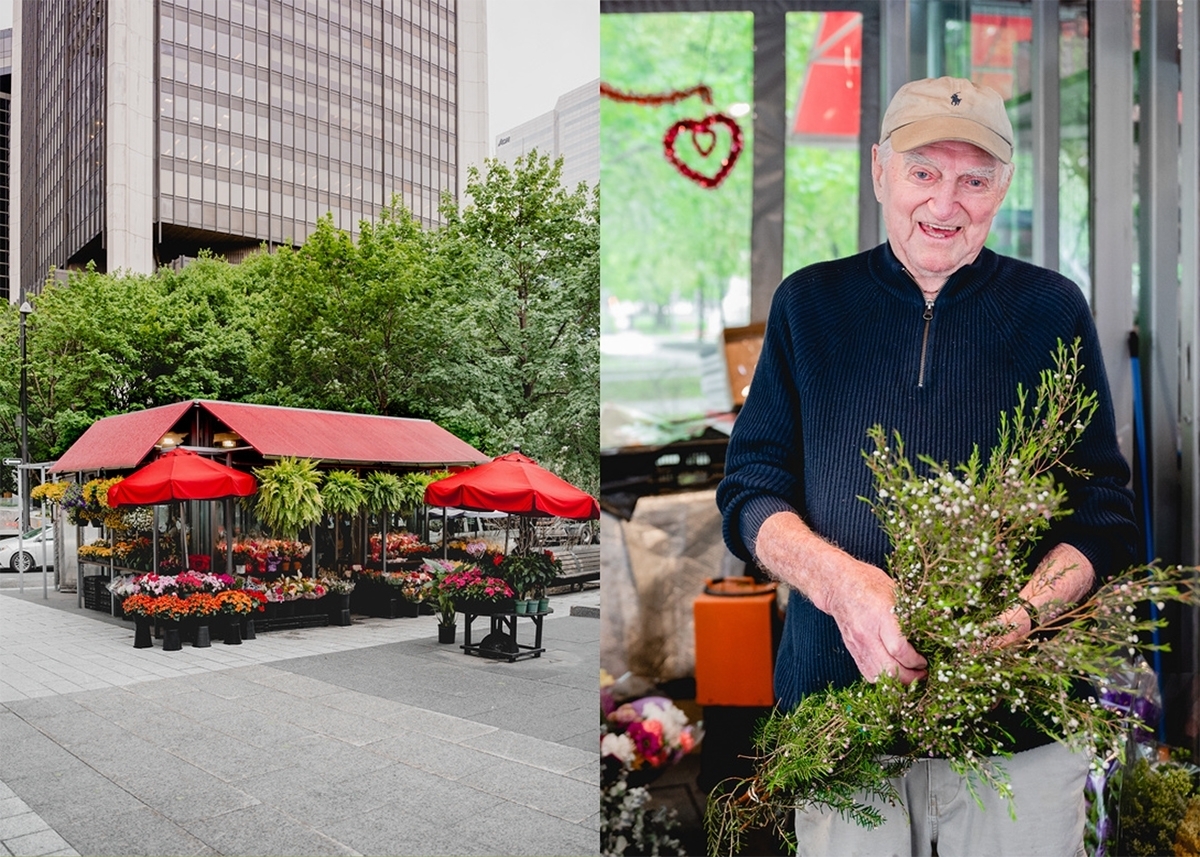 A Montréal from Another Era

Before moving to Victoria Square, Monsieur Gilles was located in Jacques-Cartier Square, in the heart of Old Montréal; his flowers took up almost half of this busy square. It was a very different Montréal back then. “People knew that spring was coming when we’d open the kiosk,” recalls Gilles Duchesne with a little nostalgia. He talks about a time when accordionists made people dance in front of his kiosk, when tourists rushed to buy flowers and when Mayor Jean Drapeau was sending his secretary to fetch huge bouquets.

It was Drapeau who suggested that he leave the Old Port to move his kiosk downtown. “Mayor Drapeau came to see me and said: “Gilles, you have to go see Victoria Square! That’s where you have to go if you want to do business!” says the florist. He was right, recalls Monsieur Gilles. 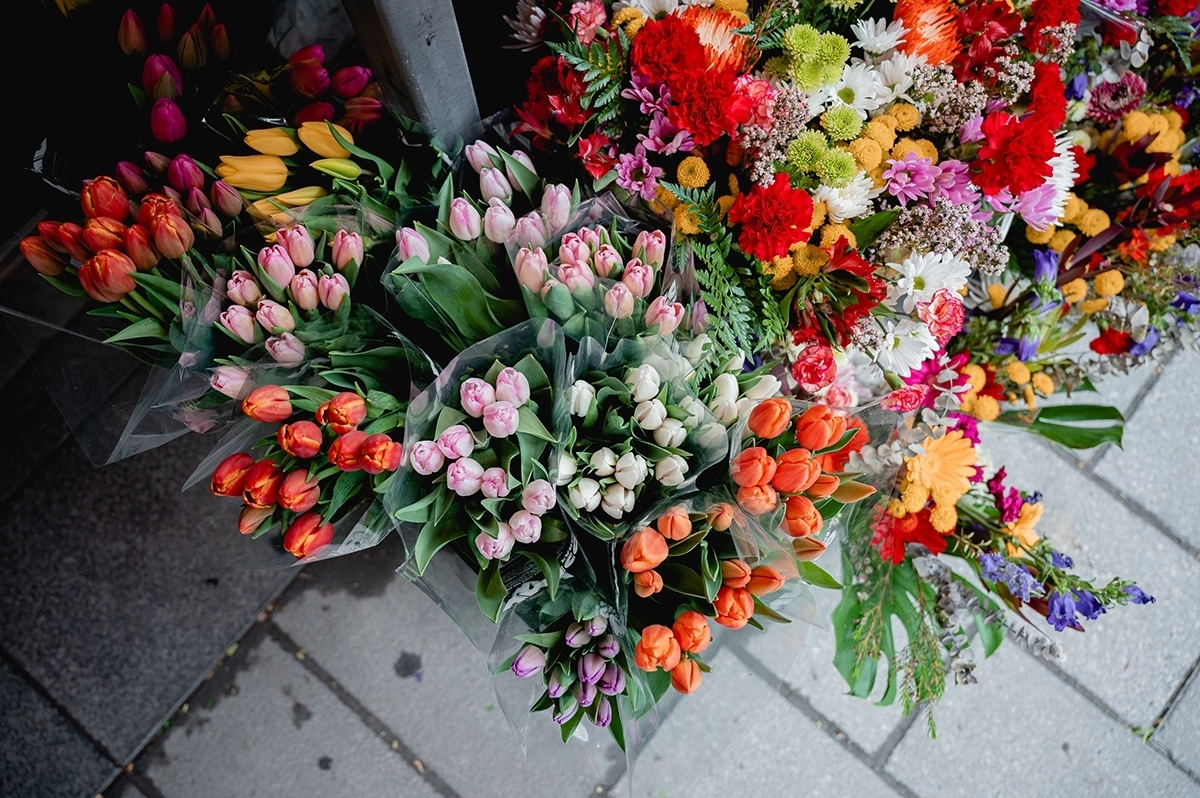 So, in the mid-1980s, Gilles Duchesne and Gerry Desjardins moved to Victoria Square. Their kiosk first stood where Square-Victoria Street now runs. It has since been relocated closer to the metro station on the corner of Saint-Jacques and McGill streets.

Their clientele became a business one. “It’s the people who work in the offices who come to buy flowers,” explains Gerry Desjardins. “Many people pick up bouquets for birthdays or retirements.”

On his arrival at this new location, Monsieur Gilles befriended a certain Pierre Péladeau, whose office, Quebecor’s head office, was opposite the flower stand.

“Every lunchtime, Pierre came to greet me and often left with flowers. He would come and tell me about his trips to Italy. I had so much fun with him,” he recalls, proudly pointing to a photo of them in front of his stand taken just a few weeks before Pierre Péladeau’s death in 1997.

For a few years now, lovers of cut flower bouquets living in the Old Port new condos have joined the business clientele.  Gerry Desjardins says that some people come “several times a week to decorate their apartment”. 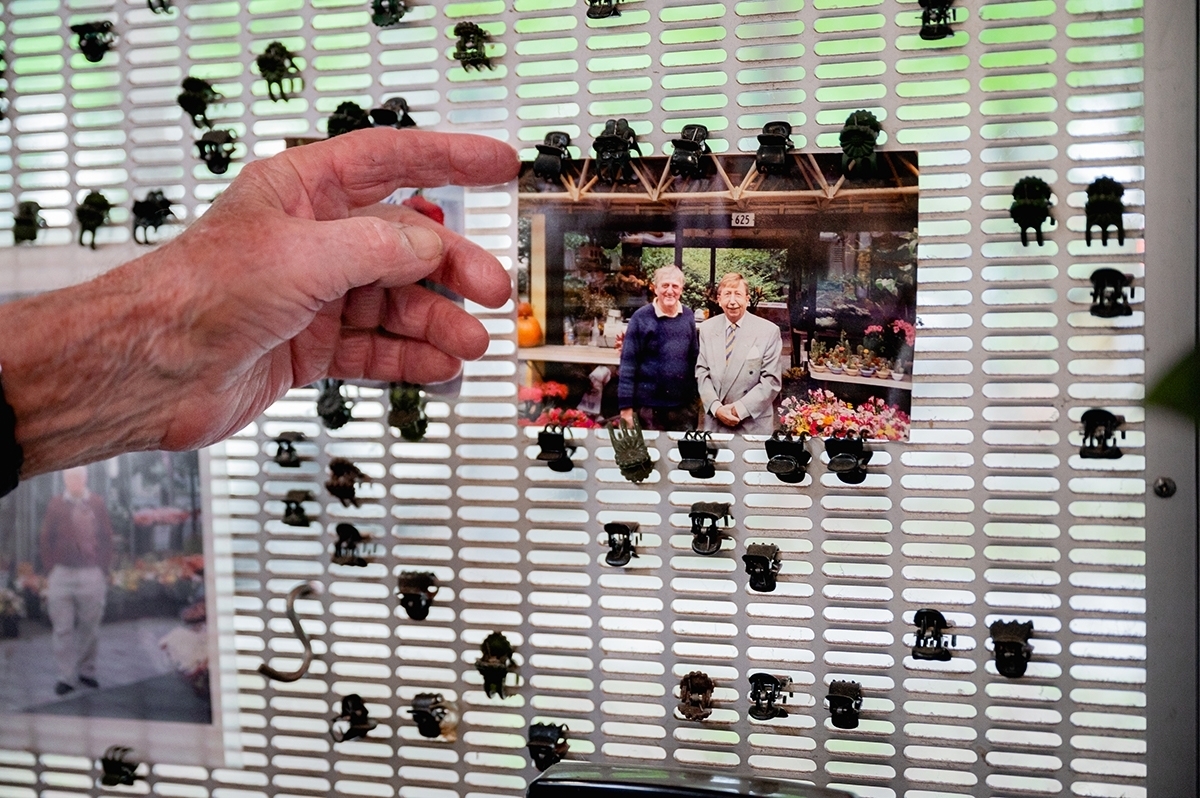 “Seasonal flowers are always very popular,” says Gerry Desjardins. When tulips are in season, some people come for them every day. The same goes for roses and peonies. “We have some regular customers who love lilies. We always have some for them,” he adds.

A wide range of products are available at Gilles and Gerry’s kiosk; bouquets, of course, but also planters, huge ferns and small trees.

Monsieur Gilles takes care of the rose bouquets, and Gerry looks after the rest. His bouquets are colourful, bright, far from the pastel bouquets trend. The florist dares to mix pink, orange, mauve and red, much to the delight of passers-by who stop admiring his artful creations. 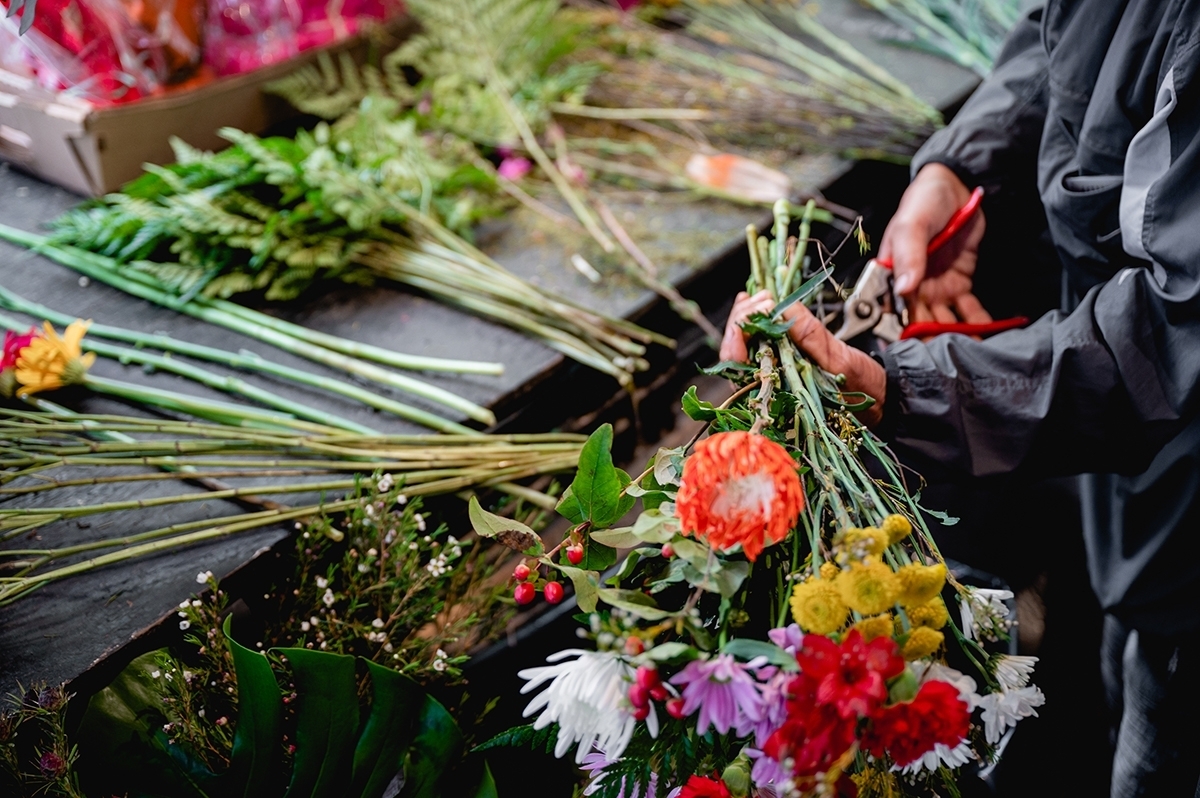 Monsieur Gilles, who’s in pretty good shape for a nonagenarian, does not plan to stop anytime soon. His colleague explains that since he has no wife or children, his clientele is his family. “He gets bored when he’s not at work,” says Gerry Desjardins. Moreover, Gilles Duchesne works standing up all day – there’s no chairs in the kiosk! – and goes to Dorval himself three times a week to pick up the kiosk flowers.

Gerry Desjardins is a great walker; he frequently walks to the Atwater Market or to the Quai de l’Horloge. Even though he thinks about retiring every year, he hasn’t decided when he will stop.

Both men are keen travellers and are already thinking about their next holiday, which they will take once the flower season is over in the autumn. Gerry hopes to travel to Europe, perhaps visit Switzerland, while Gilles plans to take yet another cruise in November with friends who live abroad.