Domaine Villeneuve: An Orchard Beyond Compare 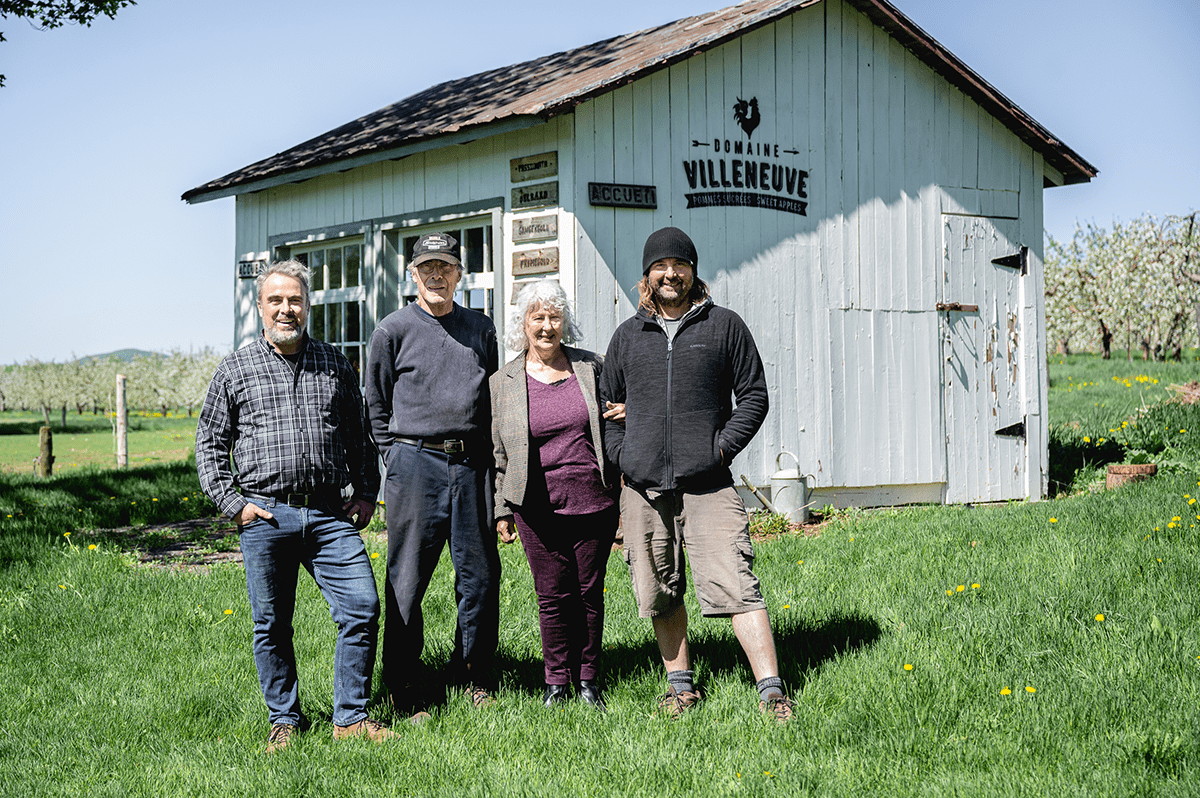 Orchards, more orchards, and, guess what, more orchards border chemin Principal in Saint-Joseph-du-Lac. But all orchards aren’t alike. It’s here, on the land where they grew up, that David and Nicolas Villeneuve became true apple growers. But they decided to focus on varieties that were not widely grown here and sell them at the Jean-Talon Market, where they have been for the past ten years, so they could have direct contact with the public. It was a risky gamble, but it bore fruit!

Gone McIntosh and Lobo apples! At the turn of the millennium, the Villeneuve brothers dared to replace the so-called standard varieties their parents had been growing since the early 1970s with sweeter varieties.

“The traditional apples market was saturated,” recalls Nicolas, whom we met in the middle of his orchard, about two kilometres from the village of Saint-Joseph-du-Lac. “Twenty years ago, when we decided to start a second career and set up an apple-growing business on our parents’ land, we decided to start from scratch. We cut down all the old apple trees and planted over 20 hectares of apple trees that would give us sweeter varieties, apples that were usually imported at the time.” If the initial idea was ambitious, the two brothers proved that these trees grow just as well in the Lower Laurentians as in France or British Columbia.

Today, Nicolas and David offer not only Paula Red, Gala and Honeycrisp, a crisp and juicy apple that is becoming increasingly popular, but also apples with less familiar names: Delcorf, Delbarestivale, Primgold or Ambrosia, known for their versatility and low acidity. Domaine Villeneuve also specializes in Rosinette and Passionata, two new 100% Québec cultivars created by the organization La Pomme de demain, of which they are members. After years of development, these two flavourful varieties – which are as good to cook as they are to eat – just recently showed up at the Jean-Talon Market stand, which is open year-round. Domaine Villeneuve also grows strawberries, watermelons and cantaloupes. There’s no denying it, the family business has expanded significantly since its beginnings.

“Eating apples, that’s what people are accustomed to in Québec. With these more complex flavours varieties, we offer different gustatory dimensions,” says Nicolas. “They’re ideal to accompany a cheese platter or in a salad, as they do not turn brown.” 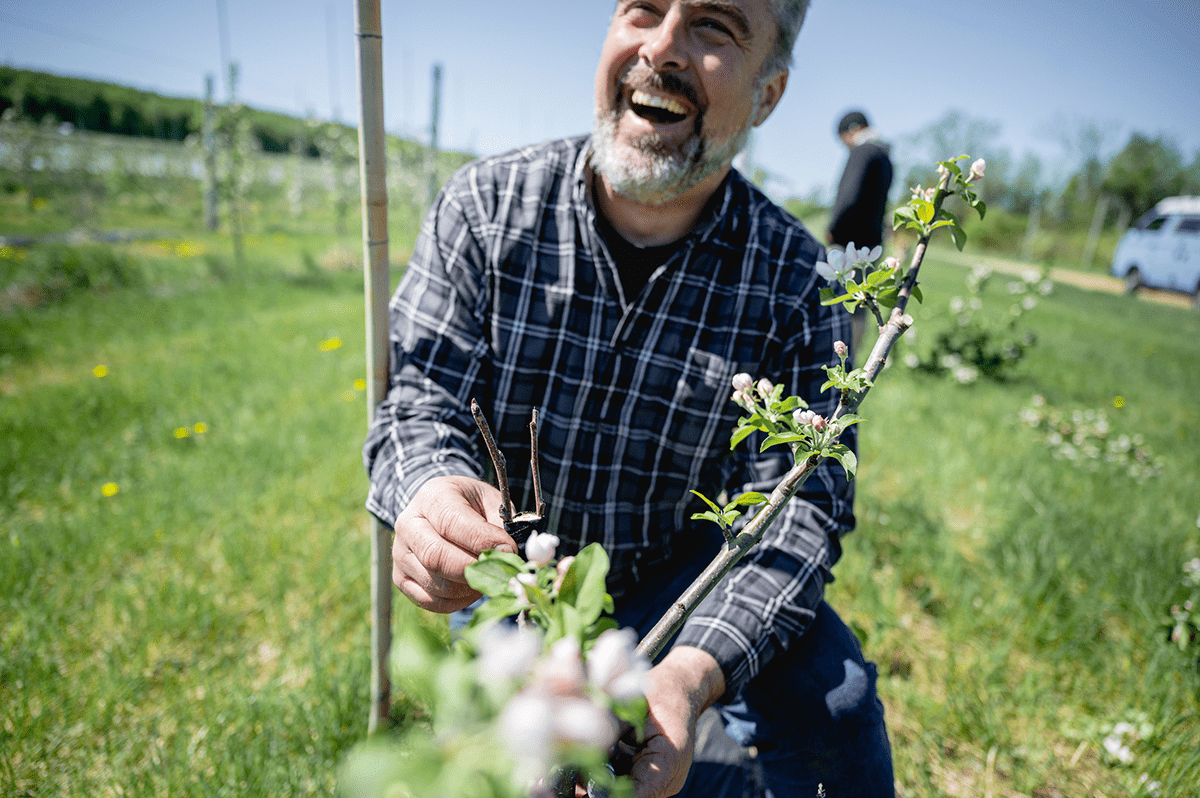 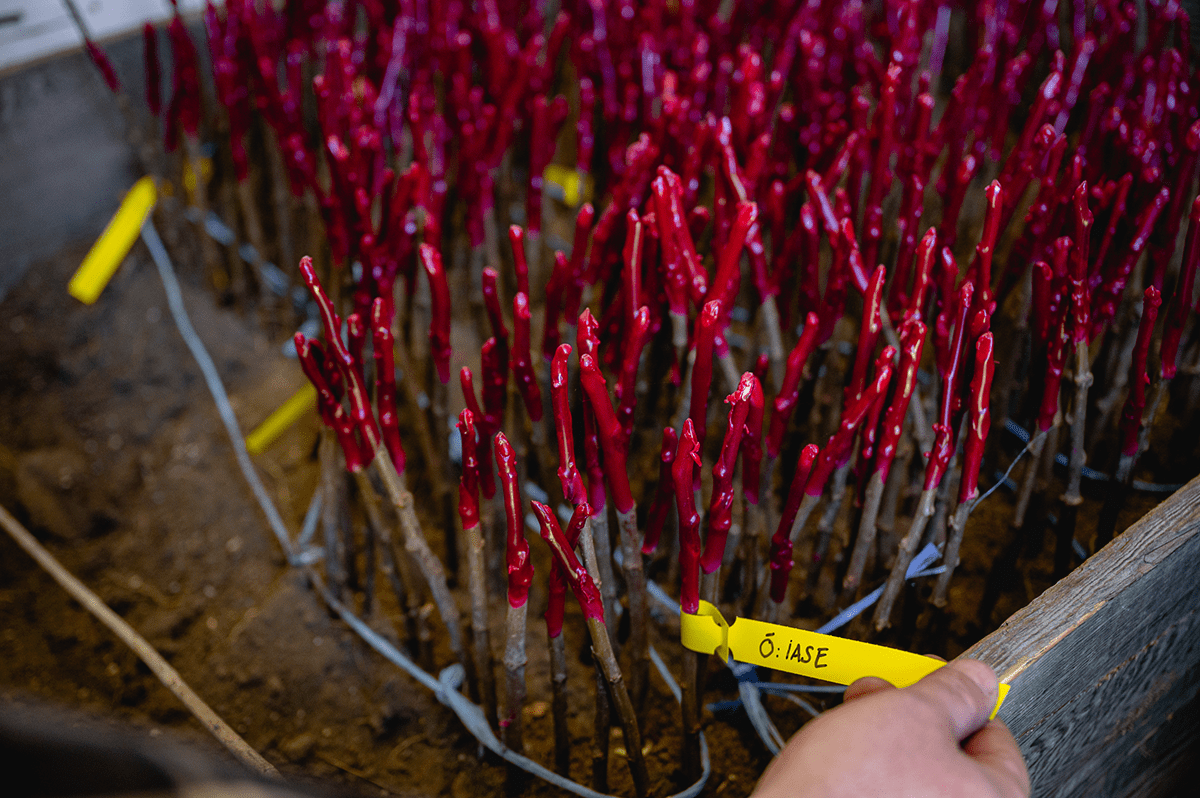 Apple growers from Father to Son, Nicolas and David Villeneuve were not necessarily destined for full-time farming. “My father was a policeman and my mother a radiology technician,” says Nicolas, who was a teacher before joining forces with his brother. “The farm was not the main income for them. It was more a retirement plan and a living environment. The business is really our idea, even if we had the support of our parents, who still live in the family home. In fact, our father is our most loyal employee! He has passed onto us his passion for farming.”

And the next generation? The third generation is already at work and there’s no shortage of projects. “So much can be done!” says the apple grower. Nicolas’ daughter has just completed her pastry making diploma and already has apple-based recipes in mind, while one of his sons will soon start heavy machinery mechanics studies. And during the summer months, the younger ones work either in the fields or at the market. Further proof that the apple never falls far from the tree! 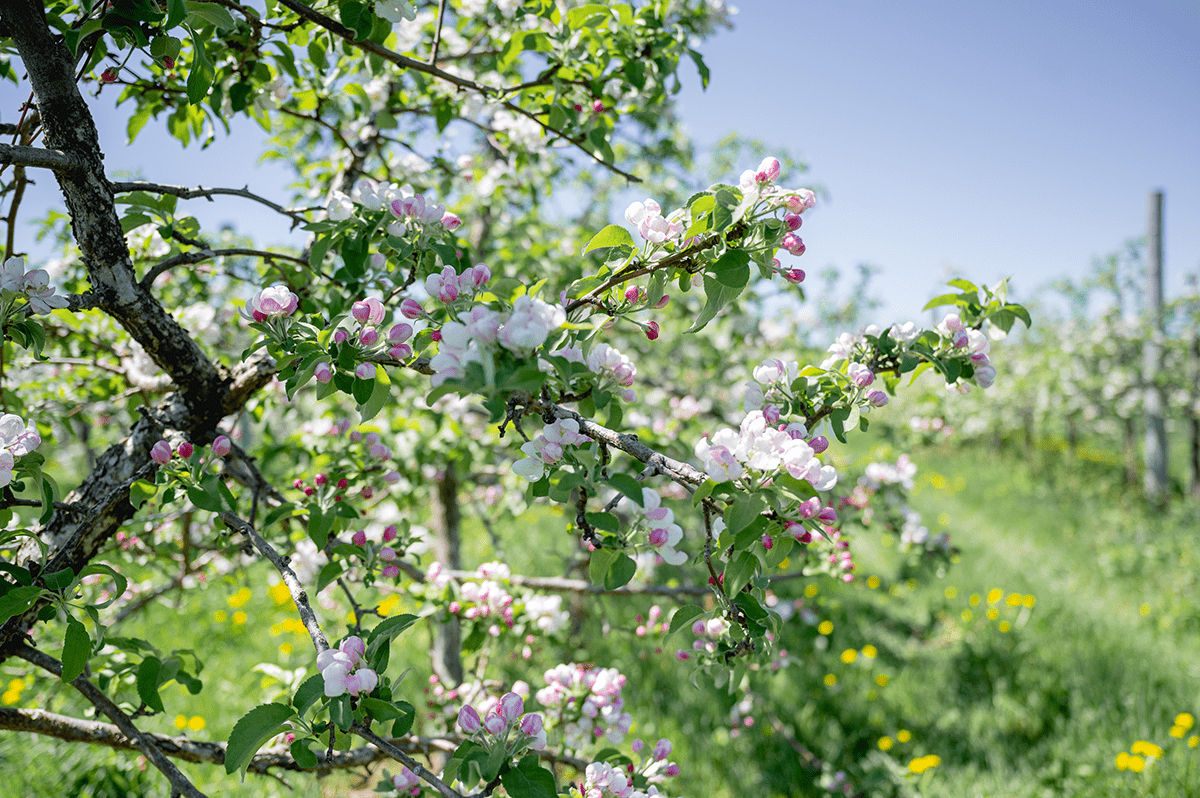 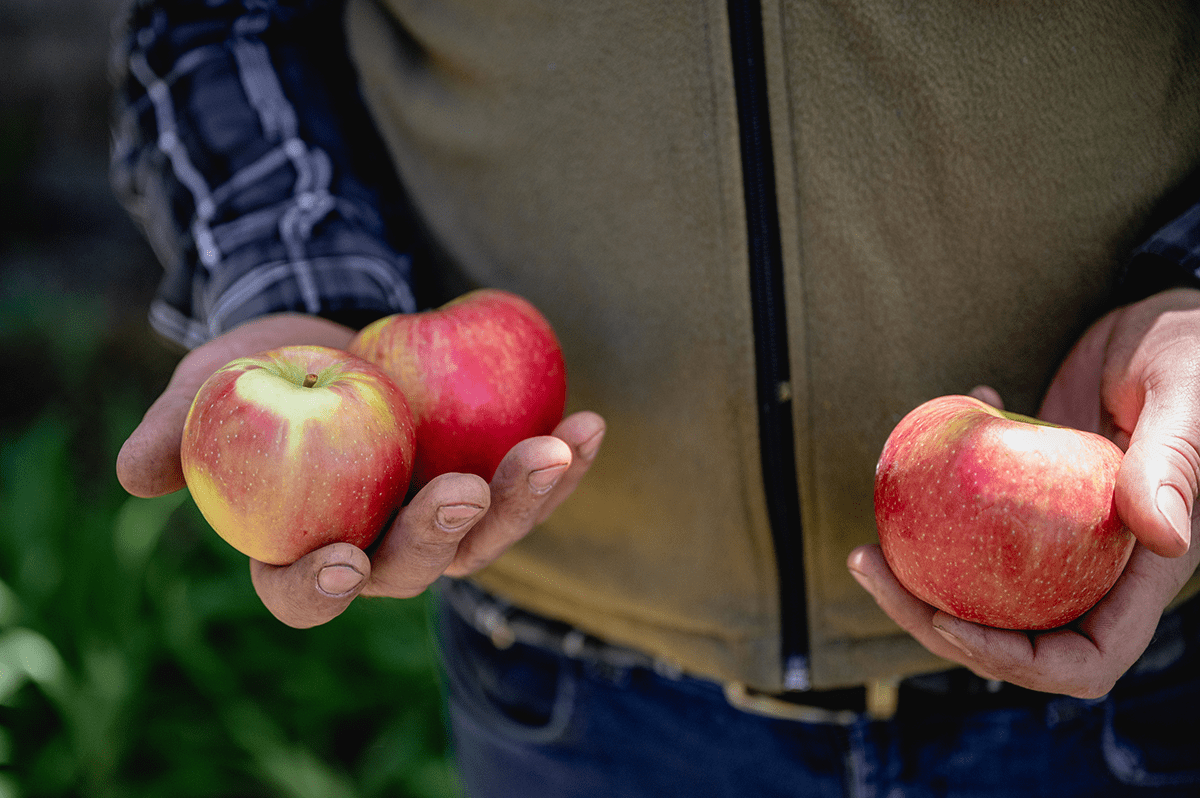 A childhood memory of the orchard?

From a very young age, we helped our parents in the orchard during the summer. We especially hated doing the crop load management. It could take a day to do one tree! We still have to do this task today, but let’s just say I’ve grown to love the meditative side of it.

What do you like about the farmers’ market experience?

As much as I love working alone in the fields, I love getting out of my bubble to meet customers at the market and share the passion I have for our products. After all, that’s why we go to the market: for the human contact with the merchant or producer, and that’s only possible with direct selling.

A must-have from your kiosk?

The Rosinette, which we now have in large enough volume to offer from the first harvest, around mid-September, until Christmas. We are really proud of this apple that was created in Québec. 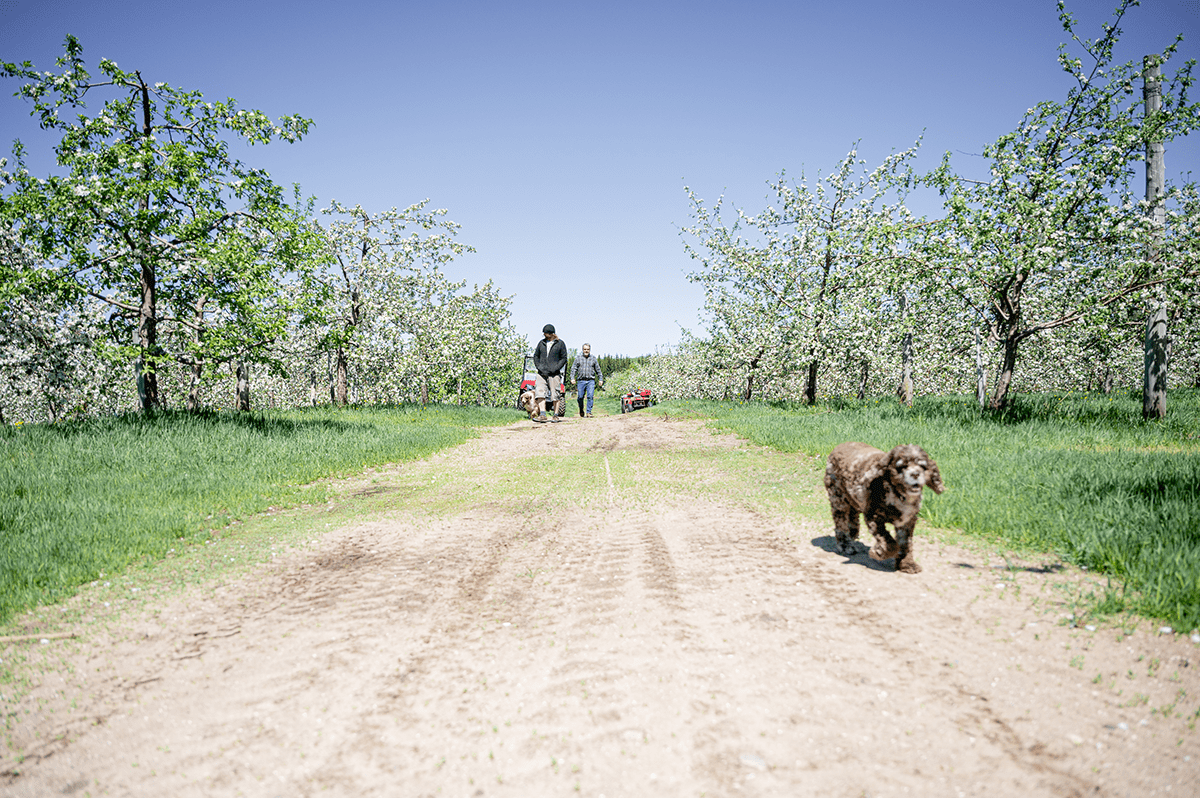