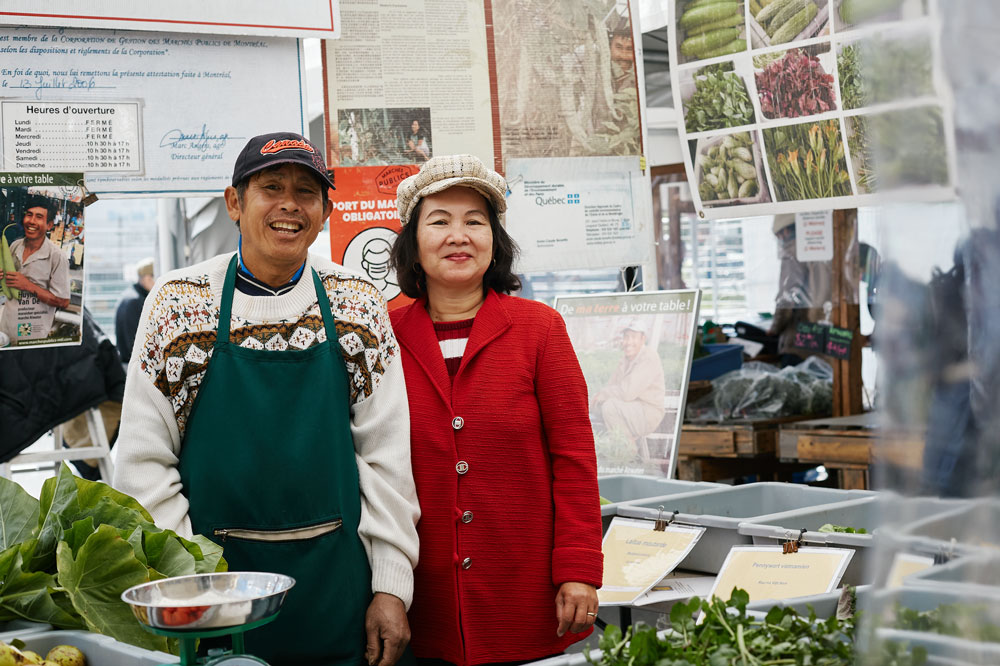 Do you know what elephant ears, fragrant loofah, bitter melon and Asian squash blossom taste like? If not, it’s time to discover one of Atwater Market best-kept secret: Le Potager Asiatique, a kiosk run by Mr. Van de Huynh and Mrs. Thu Suong Nguyen. They’re a couple of market gardeners as passionate as they are charming. Their story is moving.

Market gardener and owner of a farm in Mercier, Montérégie, for the last fifteen years, Mr. Van de Huynh grew up in the countryside during the worst days of the war in southern Vietnam, near the Mekong River. “My father died when I was five. We had no money, so I went to work in the rice fields to make a living.”

In 1990, he met his wife, who grew up on the other side of the famous river. “We spoke for a little while. Then, I immigrated to Canada. We wrote letters to each other for five years. In 1995, I returned to Vietnam for the wedding. We hadn’t seen each other beforehand.” A year later, his wife joined him in Québec. “We wanted a different life. Vietnam is a communist country and at the time, it was hard to live there.”

Ten years after their marriage, the couple bought their farm. “In the beginning, we only grew vegetables to feed our family,” says the market grower. “I had never grown vegetables in Vietnam, but I had observed the farmers in my village. I knew how to take care of a vegetable garden.”

Soon Mr. Van de Huynh realized that members of the large Vietnamese community in Québec were buying vegetables that were imported by Asian businesses. “Importing is expensive. I decided I should have a kiosk at Atwater Market to be able to offer more affordable vegetables and I applied for a permit in 2006.”

Taking pride in growing vegetables without pesticides, the owners of Le Potager Asiatique are not afraid of working long hours. “I go to work at around 3 o’clock in the morning,” says Mr. Van de Huynh. “It’s easier to work at night with a light. By noon, it’s too hot and you can’t work anymore.” Between 3 and 10, he picks the vegetables that will be sold. He fills the truck with his wife and heads for the market where he stays until late afternoon. Then he returns to the fields until 9 or 10 p.m. “These are very long days. But I’m used to it and it’s become easier.”

The Potager Asiatique display will delight the most discerning palate. The Vietnamese growers are eager to pass on their knowledge to anyone who comes to them with a question or a curious look. “First, I eat a piece of the vegetable in front of them to allay their fear, then I let them taste it,” says Mr. Van de Huynh, handing us a piece of extremely tasty Vietnamese spinach.

In recent years, he has seen a growing interest in his products. “Quebecers are travelling more and more to Vietnam. They discover vegetables there and when they come back, they want to enjoy the same flavours.”

To answer the frequent questions, the couple prepared information sheets on how to prepare their products and their medicinal uses. That’s how we learn that bitter melon is supposed to reduce diabetes and cholesterol and can be used in salads, sautés, soups or omelettes. Vietnamese celery, which is said to have positive effects on the liver and against high blood pressure, can be used to flavour a stir-fry, a salad or a soup.

“The children give us a hand, but I want them to focus on school,” says the father. “I couldn’t go to school. It’s important to me that they get an education.” The 61-year-old Vietnamese vegetable farmer is far from thinking about retirement. “I think I’ll be working for several more years. I’ll go on as long as my health allows me.”