Porcmeilleur : delicious from snout to tail 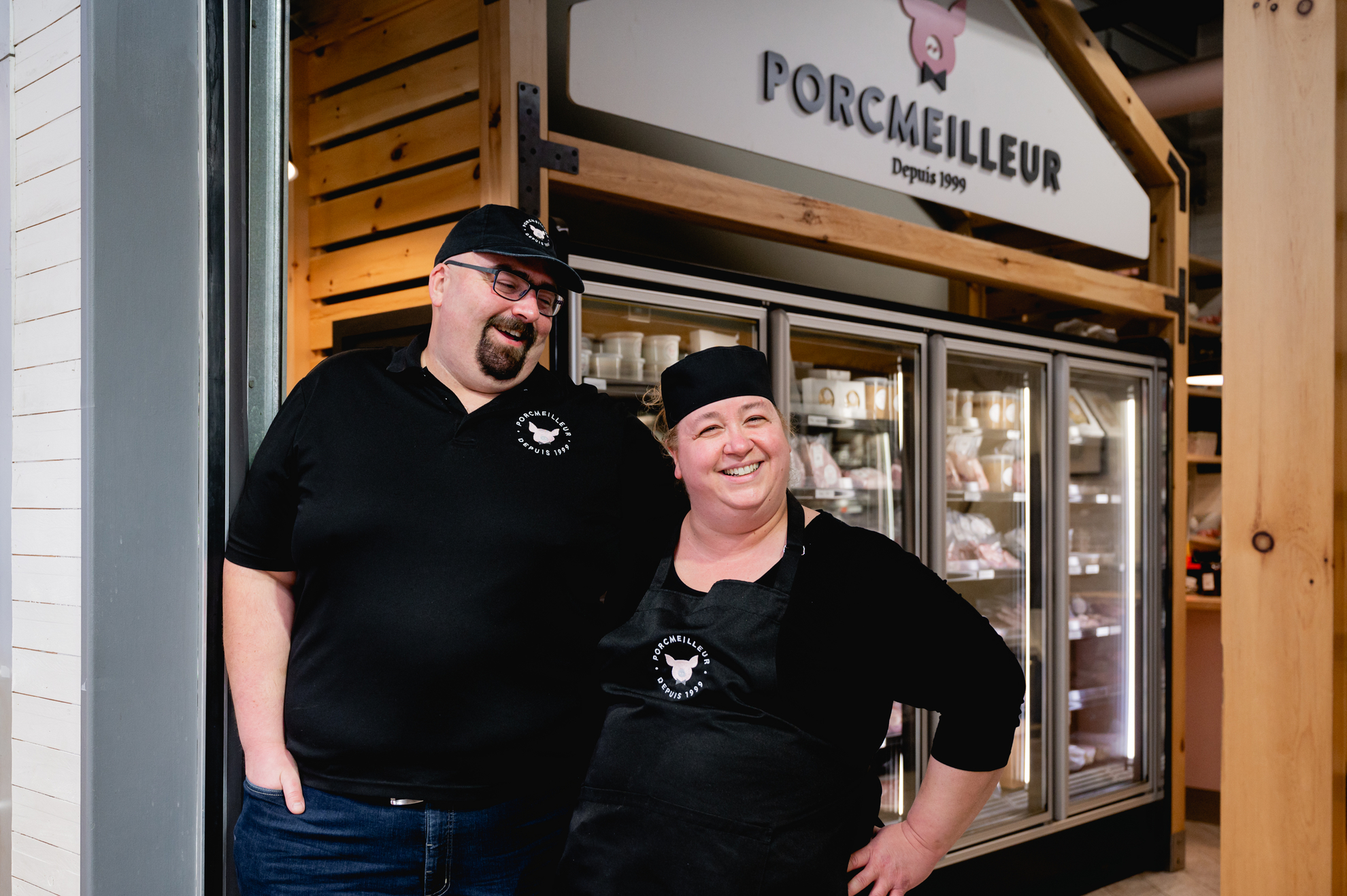 Josiane Palardy and Pascal Viens are busy all year round, but this is especially true during the holiday season. The owners of the Porcmeilleur butcher shop, a young Jean-Talon Market institution, start preparing for Christmas in mid-October! Three thousand. According to the owners’ estimate, that’s the number of meat pies the small shop sells between the beginning of November and the end of December. That’s 60% of their annual production of tourtières sold out in two months. “We have to start producing and freezing by mid-October so that everyone can have their tourtière on December 25,” explains Pascal Viens, the friendly giant who runs Porcmeilleur with his wife, Josiane. Three thousand hand-rolled meat pies are prepared and cooked in the narrow kitchen of Porcmeilleur. On top of that, the equally popular stews (with handmade meatballs), cretons and baked beans are also prepared to the great pleasure of their customers. All these traditional recipes come from Josiane’s mother, who still confects side dishes to be sold in the shop. Fruit ketchup and pickled beets, for example. “We have customers who buy their tourtière and stew at the beginning of November to avoid the rush and stress of the holidays,” says Josiane, smiling proudly at the popularity of the products she prepares with such loving care. 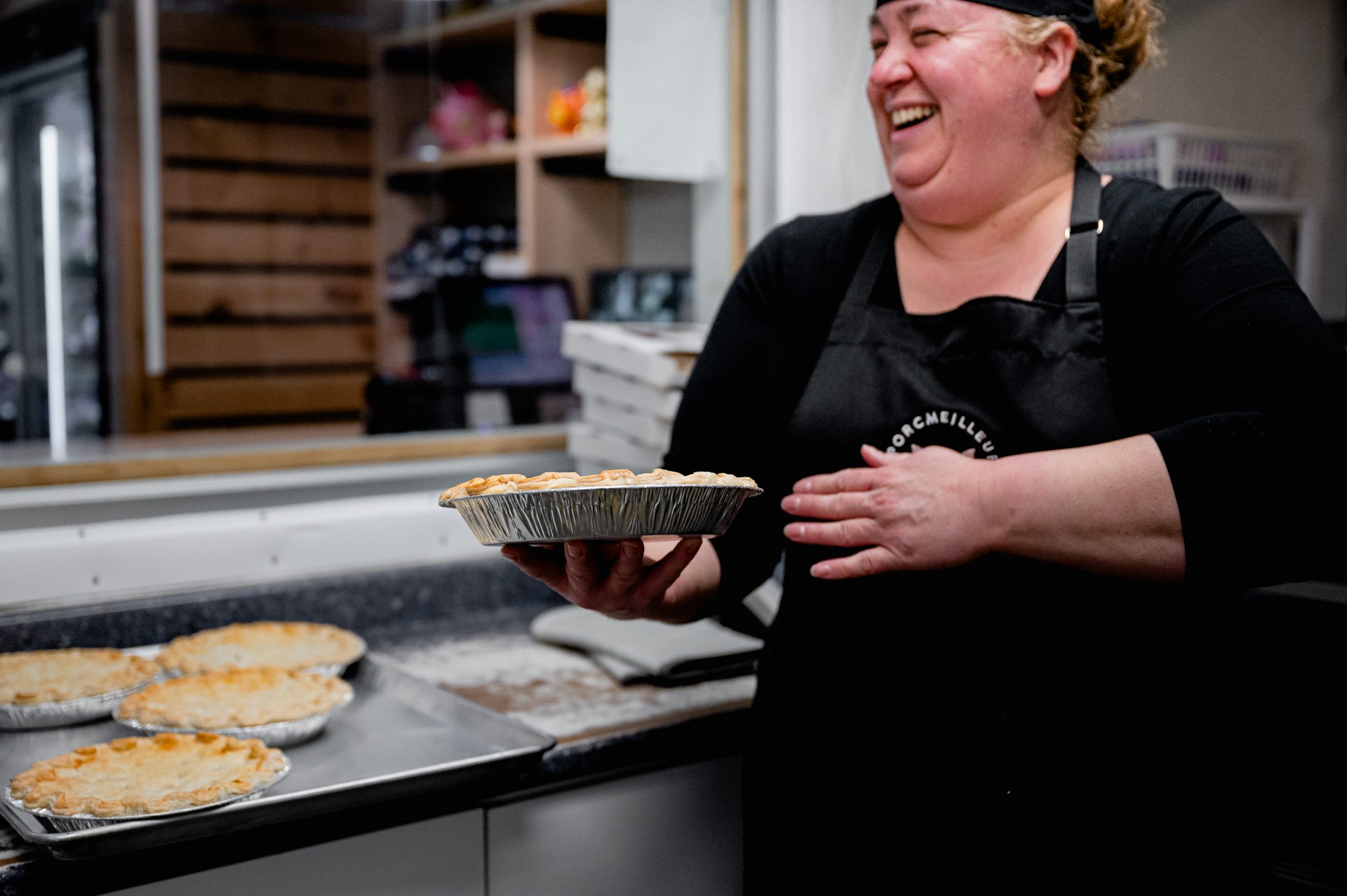 Des débuts modestes
Modest beginings
When the shop opened in 2004, Porcmeilleur’s prepared meals were just a way to dispose of unsold surplus, but since then, the pork butcher shop has come a long way. When the adventure in the outdoor stalls of Jean-Talon Market began in 2002, Josiane was a daycare educator and Pascal was an unemployed electromechanical technician. “We were in our early twenties and very naive,” Josiane recalls fondly. “We didn’t know a thing about the trade, we learned on the job!” The couple, who now have four children, was not, however, sailing in uncharted waters. Back in the 1950s, Josiane’s grandfather sold vegetables at Jean-Talon Market. Her parents also had their own market stall – now taken over by their daughter Élise – before they started raising pigs in the 1970s. All the animals, which are sold from snout to tail or else transformed into ready-to-eat meals, still come from the family farm in Sainte-Madeleine. 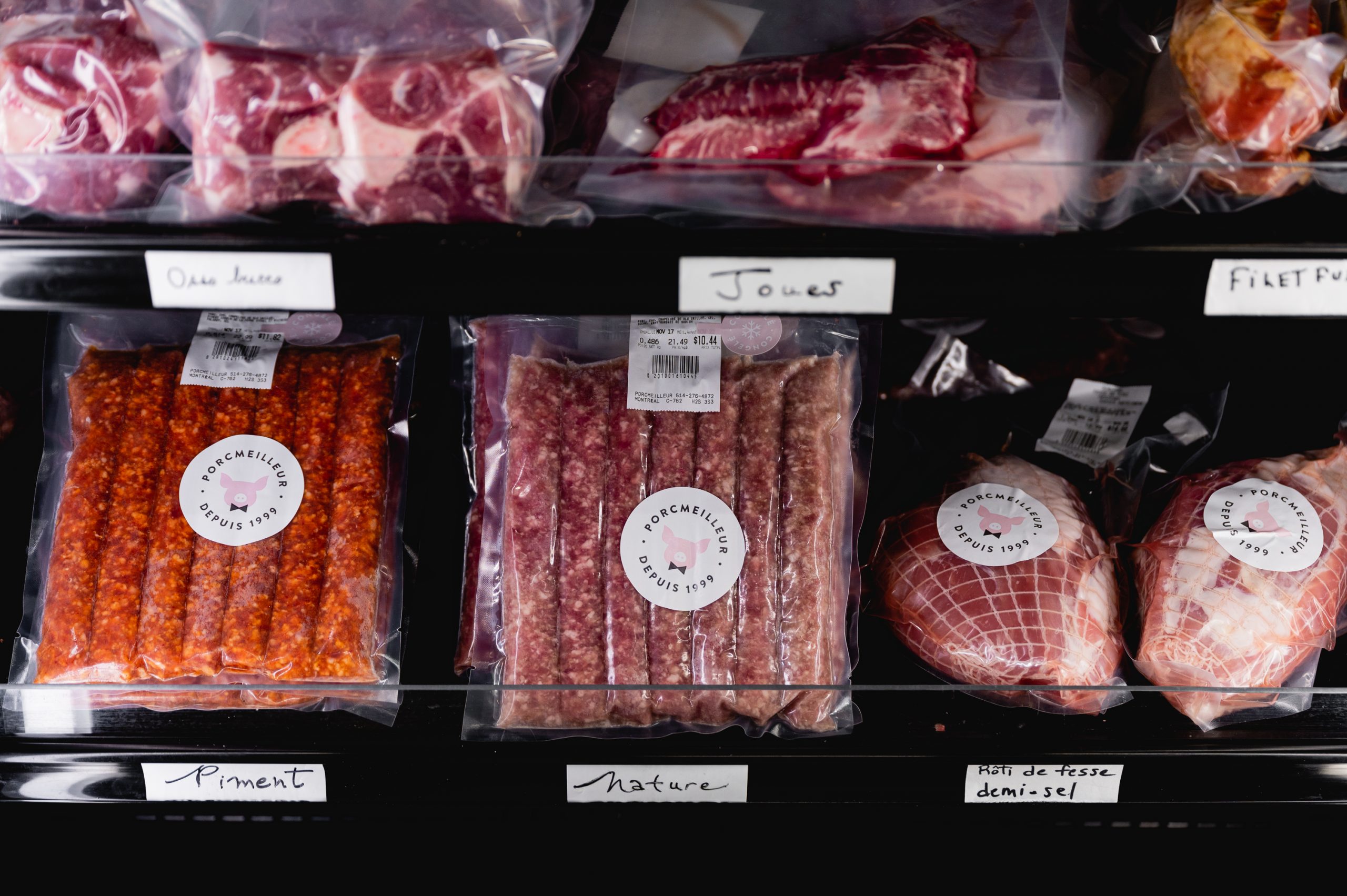 Milk-fed pigs
The distinctive thing about Porcmeilleur’s pigs is that they are milk-fed. They even get yogurt sometimes – or ice cream! This is made possible because the farm collects the surplus from large dairies to feed their animals with a mixture of water, cereals and dairy products. This method, very uncommon in Québec, produces meat that Pascal says is “whiter and more marbled.” The result is a high-quality, juicy and exceptionally tender meat. “That’s how we found our niche,” explains Pascal. A niche in which has delighted a large and loyal clientele for the past 20 years. “Jean-Talon Market customers are people aware of the importance of eating well,” says Josiane, who manages the kitchen and retail sales while Pascal takes care of the butchery, administration and deliveries. “Some come and do their shopping three, four, five times a week. They like to have a personalized service, chat and get advice.” And that’s a good thing, because the couple love to share their favourites and aren’t shy about doing so. Pascal and Josiane are bon vivants for whom food is synonymous with happiness. “The best seller in a counter is the product you like most. It’s always the easiest to sell,” explains Pascal. “When it’s good, it sells itself. If I don’t like a product, I don’t sell it. Maybe we lose out on some products that everyone likes but me, but that’s just the way it is!” The friendly duo do their utmost to maintain a family atmosphere with customers, staff and other traders at the market. “We like to have fun at work and I think you can feel it,” says Josiane. That’s how we are in everyday life: being happy is easy for us!” 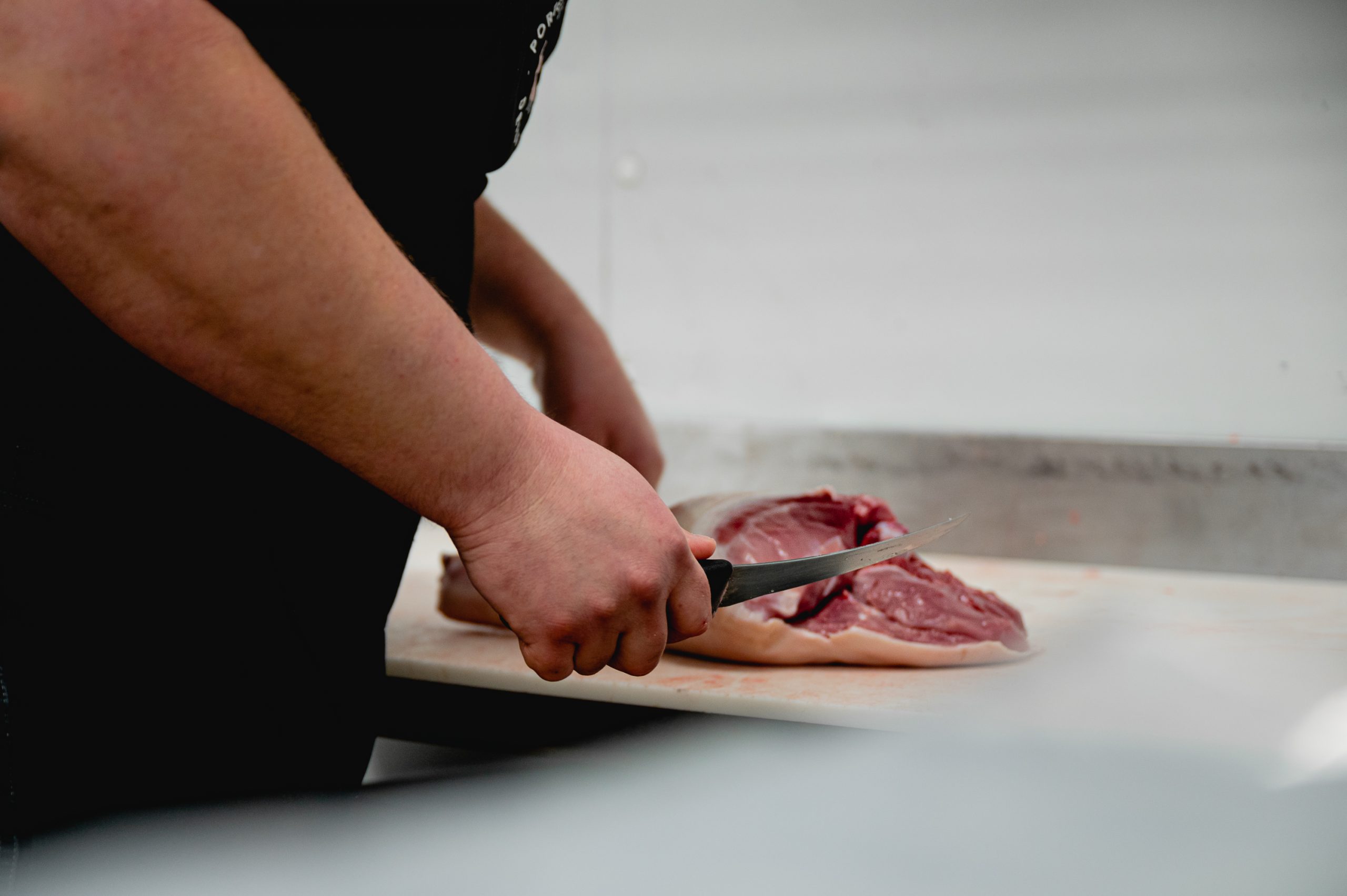 Quick questions to Pascal Viens One word to describe the market’s atmosphere?
Family friendly. Since everyone eats, people come shopping with the family! A must-have product when visiting your booth?
Bacon, probably our biggest seller! Customers tell us it’s addictive. What motivates you to get up so early in the morning?
Traffic!(laughs) [Pascal gets up at 4:30 a.m. to avoid the morning traffic]. Seriously, it’s the passion. If we didn’t love our job, we wouldn’t put up with all the inconveniences.
Text by Benoit Valois-Nadeau, magazine Caribou
Photos by Dominique Viau, Bodoüm Photographie