The Jasmin family: happiness is contagious! 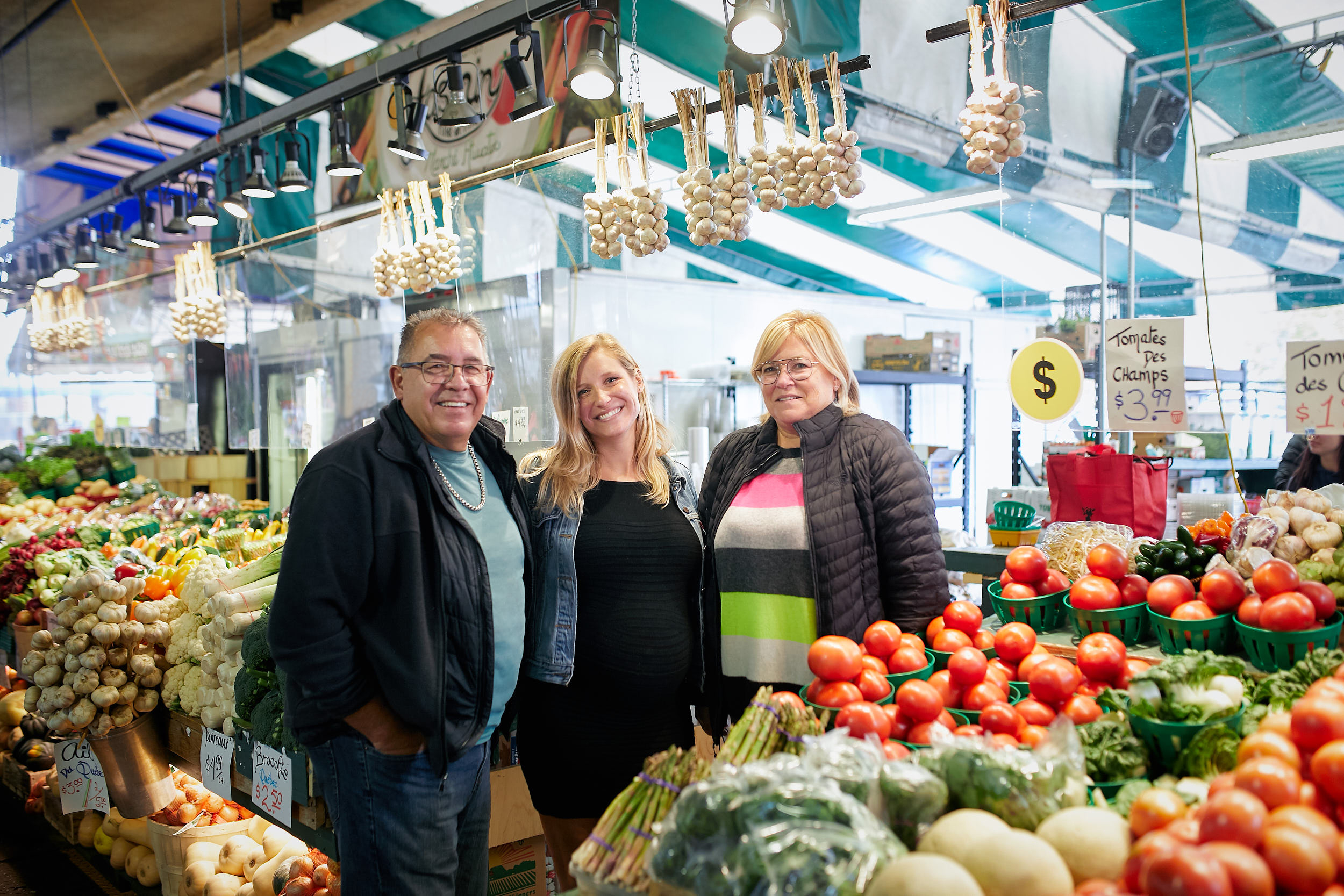 “Happy people lead a quiet life,” goes the popular saying. The Jasmin family, which has been selling fruits and vegetables at the Atwater market for 56 years, proves the proverb wrong. Meet a happy family whose genealogy is conspicuously intertwined with that of Montréal’s public markets. “I was born under a table loaded with vegetables,” laughs Luc Jasmin, who took over the management of Jasmin & Fils from his father and grandfather with his wife Lucie. Established at the Atwater Market for more than half a century, the Jasmin family had a shop at the Lachine Market and then at the venerable Bonsecours Market before settling in Saint-Henri. Now in his early sixties, Luc Jasmin has seen with his own eyes the long transformation of Montréal’s markets. He has experienced the era of temporary installations, Sunday closures and had to face the whims of Mother Nature. “My father sold his vegetables from his truck bed, rain or shine, even in winter. No walls, no awning, no fridge, nothing. All we had to protect ourselves was umbrellas. It was no fun when it rained all day! And we’d lose tons of merchandise on scorching days. Cold in the winter, hot in the summer; it was miserable. But not anymore!” he says with a big smile. Since then, both the Atwater Market and the family business have grown, while the facilities became a lot more sophisticated. Jasmin & Fils employs up to 14 employees, including two of Luc and Lucie’s three children. Karolane is in charge of management and Cédérik gets up at dawn to carefully select the fruits and vegetables at Place des producteurs and from the Central Market wholesalers. 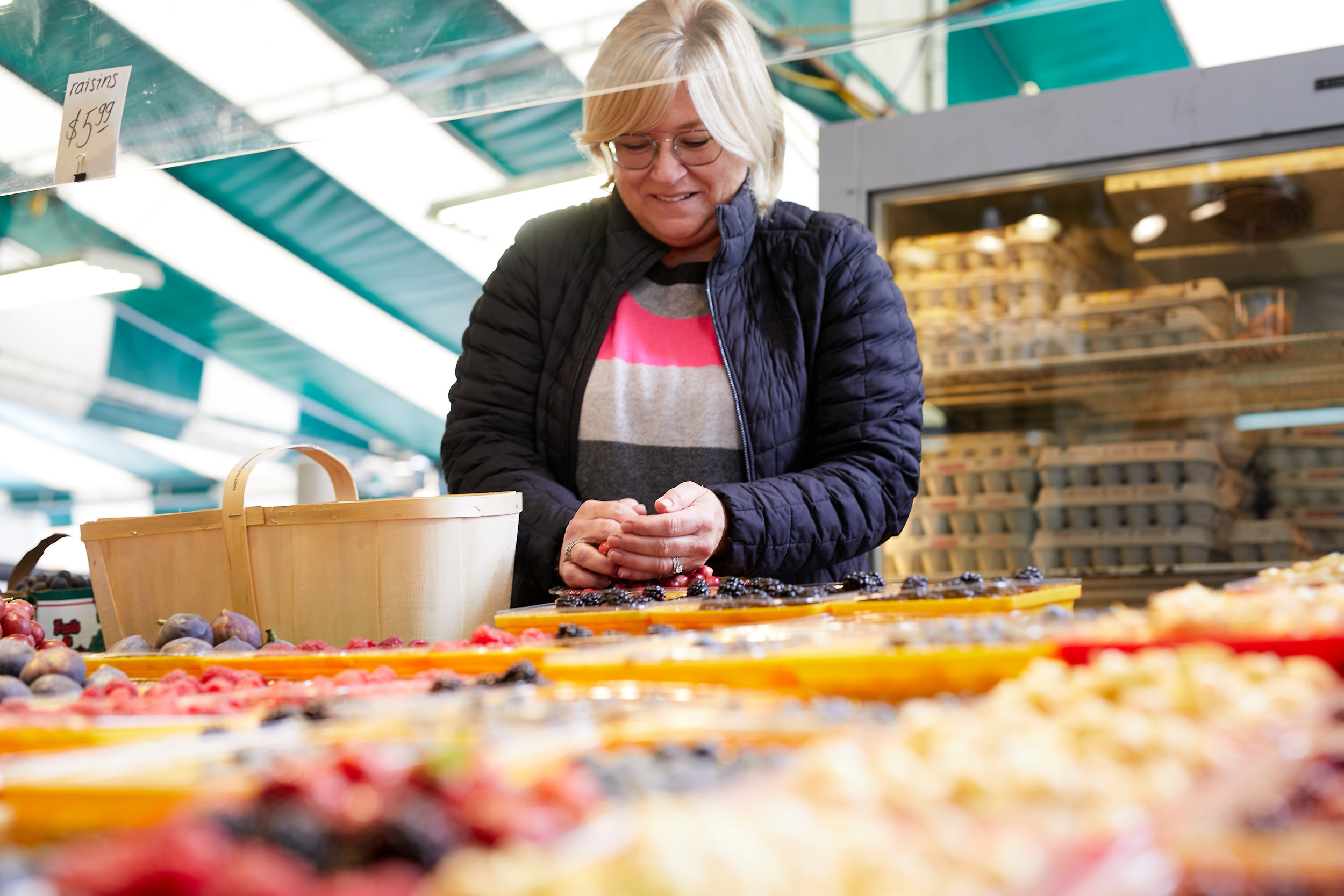 With the addition of their offspring in the business, Luc and Lucie decided to focus on the kiosk to offer the best fruits and vegetables from Québec and elsewhere, while producing their basil and other horticultural products in the spring. But one thing remains unchanged: their passion for their profession. “I love my job,” whispers Luc, who’s happy to act as intermediary between market gardeners and the Atwater Market customers. And the love of his job he passed on to his loved ones. “One day, he asked me if I’d like to work with him,” says Lucie Bélanger, whose grandfather founded another Atwater Market institution: the butcher shop Adélard Bélanger & Fils. “Before that, I was working in accounting. I said, let’s try it for a year and see. And it worked! We’ve been working together for 37 years.” Customer first
After growing up around fruit and vegetable stalls, Karolane and Cédérik chose to follow in their parents’ path. For Cédérik, there were never any question. As early as high school, he affirmed that he was going to “take over from my parents.” If all goes according to plan, the two children will take over the business within five years, when Luc and Lucie will be able to take their well-deserved retirement. “I studied marketing at HEC, but I didn’t really know what I wanted to do afterwards,” says a beaming Karolane who’s eight-months pregnant. “Having a boss wasn’t for me. I like to manage things myself. I tried to work elsewhere, but I returned to my first love – the family business. I must add that I started working here when I was eight, standing on apple boxes because I wasn’t tall enough to reach the table!” 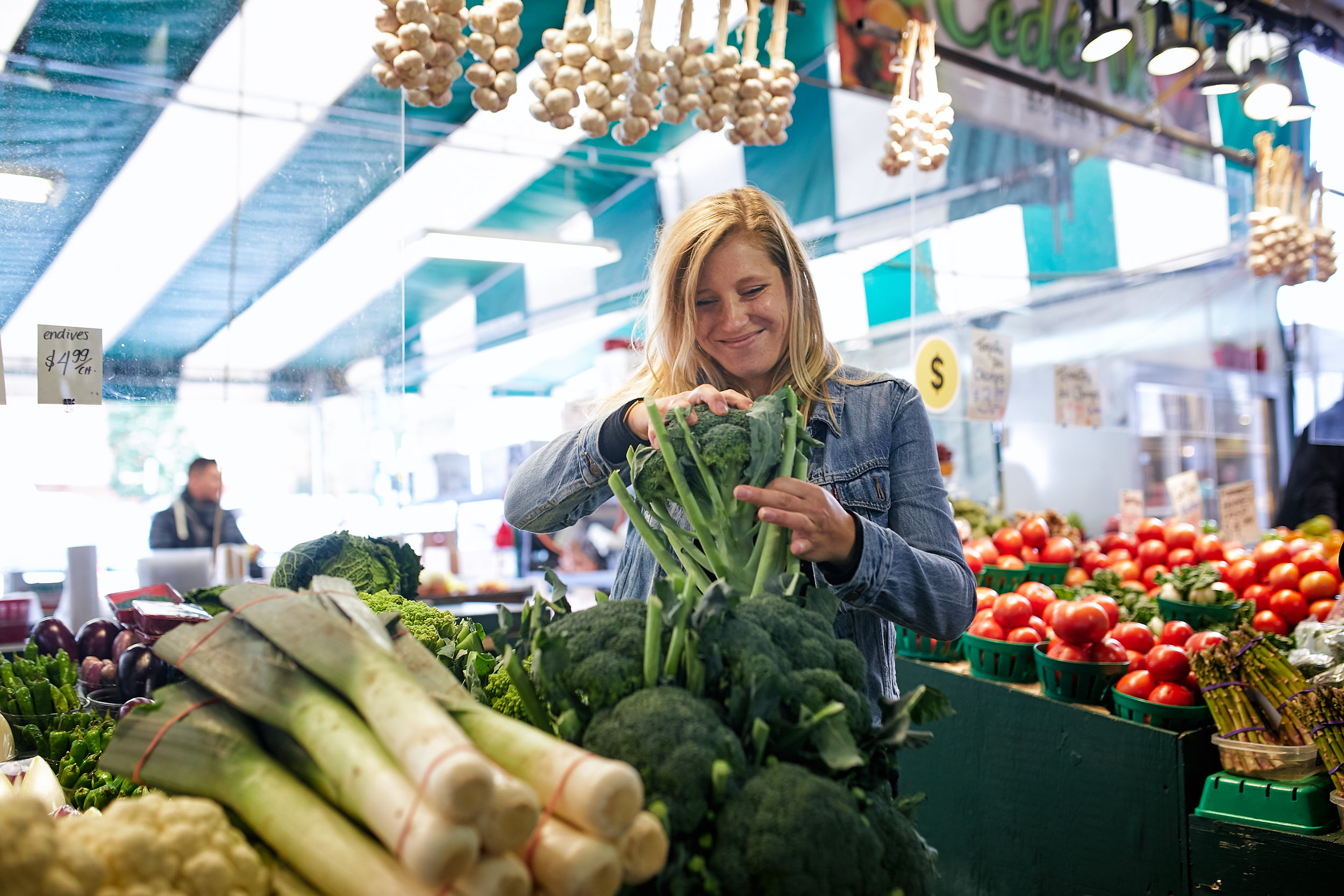 At only 29, the mother-to-be has enough hindsight to grasp the evolution of her clientele over time: “They’re better informed, but fussier!” “Today, the customer comes in and wants to do his grocery shopping without having to visit several kiosks. Before, people bought larger quantities and looked for low prices to feed as many people as possible. People still cook, but less than they once did. A customer may ask for a single celery stalk to complete the list of ingredients for the soup he’ll be making!” The Jasmine family welcomes such requests with a smile, as they make customer service a cardinal virtue. “Taking good care of your customers is the most important lesson I’ve learned,” says Karolane. “People come for the quality, but also for the service. In return, you get to know your customers and what they like. We ask questions and take a genuine interest in them.” “That’s the difference between a supermarket and us,” says Luc. The family also makes a point of selecting only the best fruits and vegetables for their buyers. “The producers know us, they know that if their products are not perfect, we won’t take them. The same goes for the wholesalers. When they see our name on an order, they know that all we’re interested in is beautiful produce,” adds the patriarch of the clan. 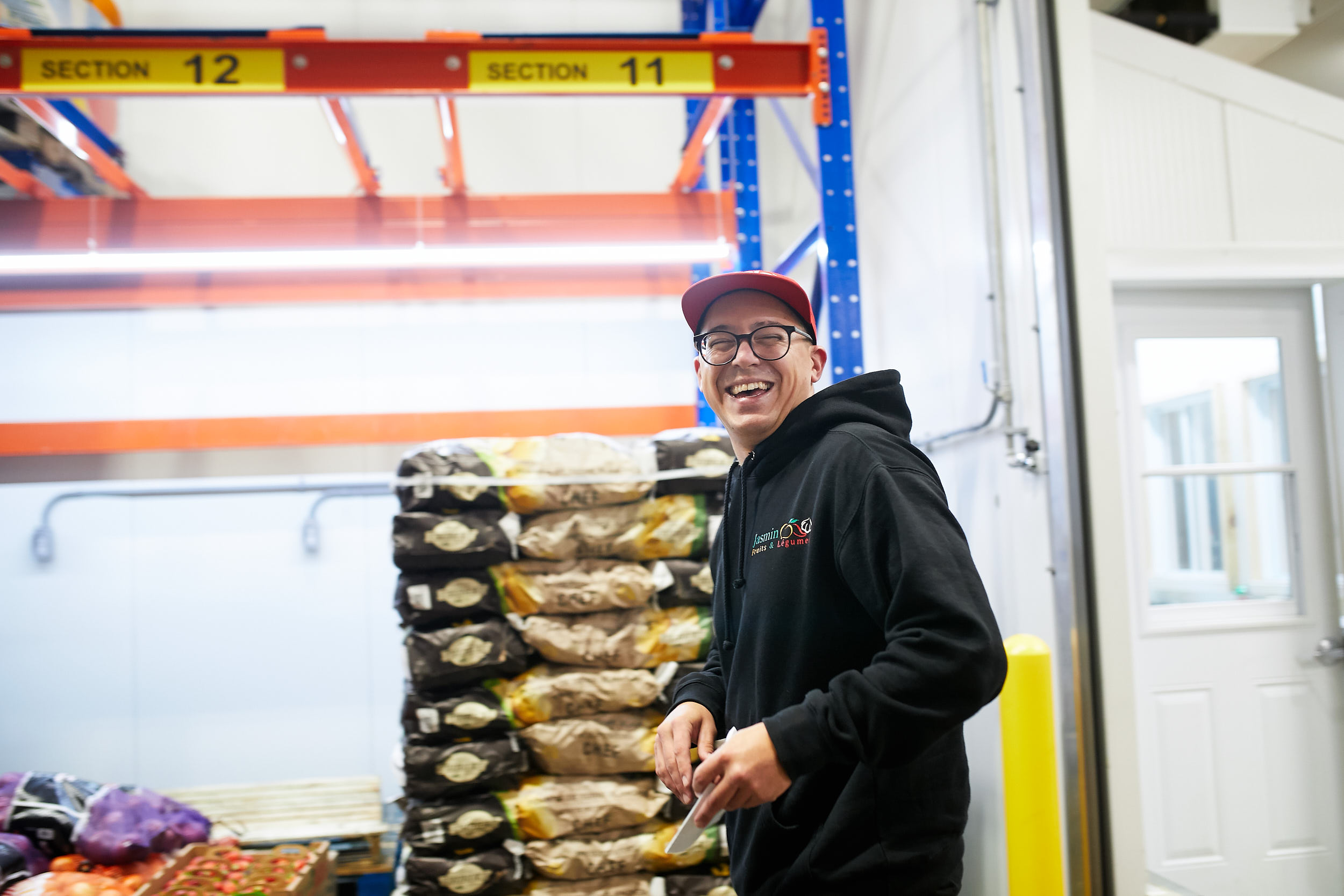 Judging by the action at the kiosk, you can tell that the formula is working.
“We’re often told that it’s fun to shop with us. ‘You look like a happy family,’ is another thing people tell us. We’re happy and it shows. It’s also contagious!” sums up Lucie. Quick questions to Lucie Bélanger A word to describe the market?
Festive! Everyone is always smiling. A must-have product when visiting your kiosk?
We always feature seasonal products. At the moment it’s cabbage, cauliflower, romanesco cabbages and leeks. The thing that motivates you to get up so early in the morning?
It’s a tough job, but if you love it, you can make a great life of it. 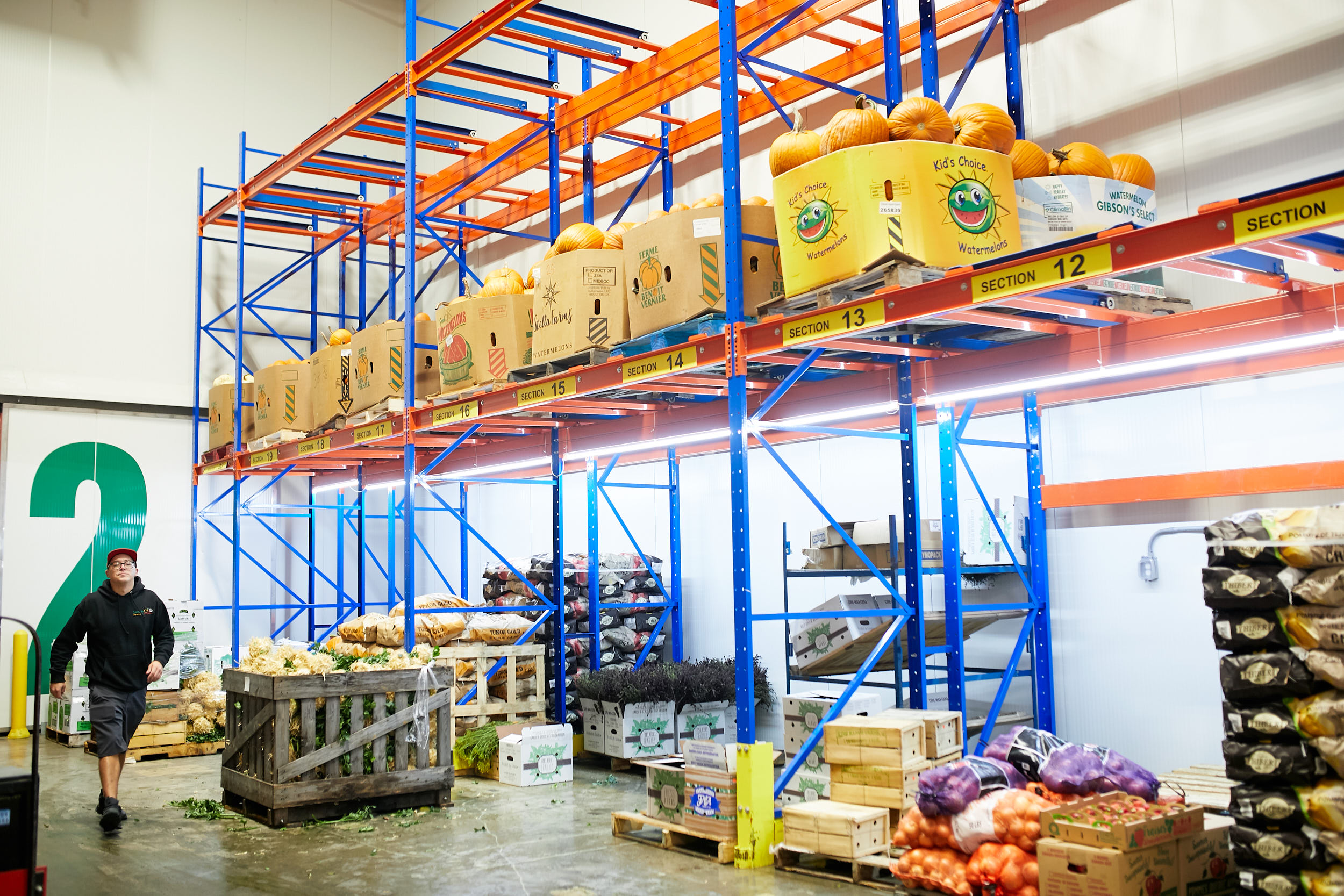