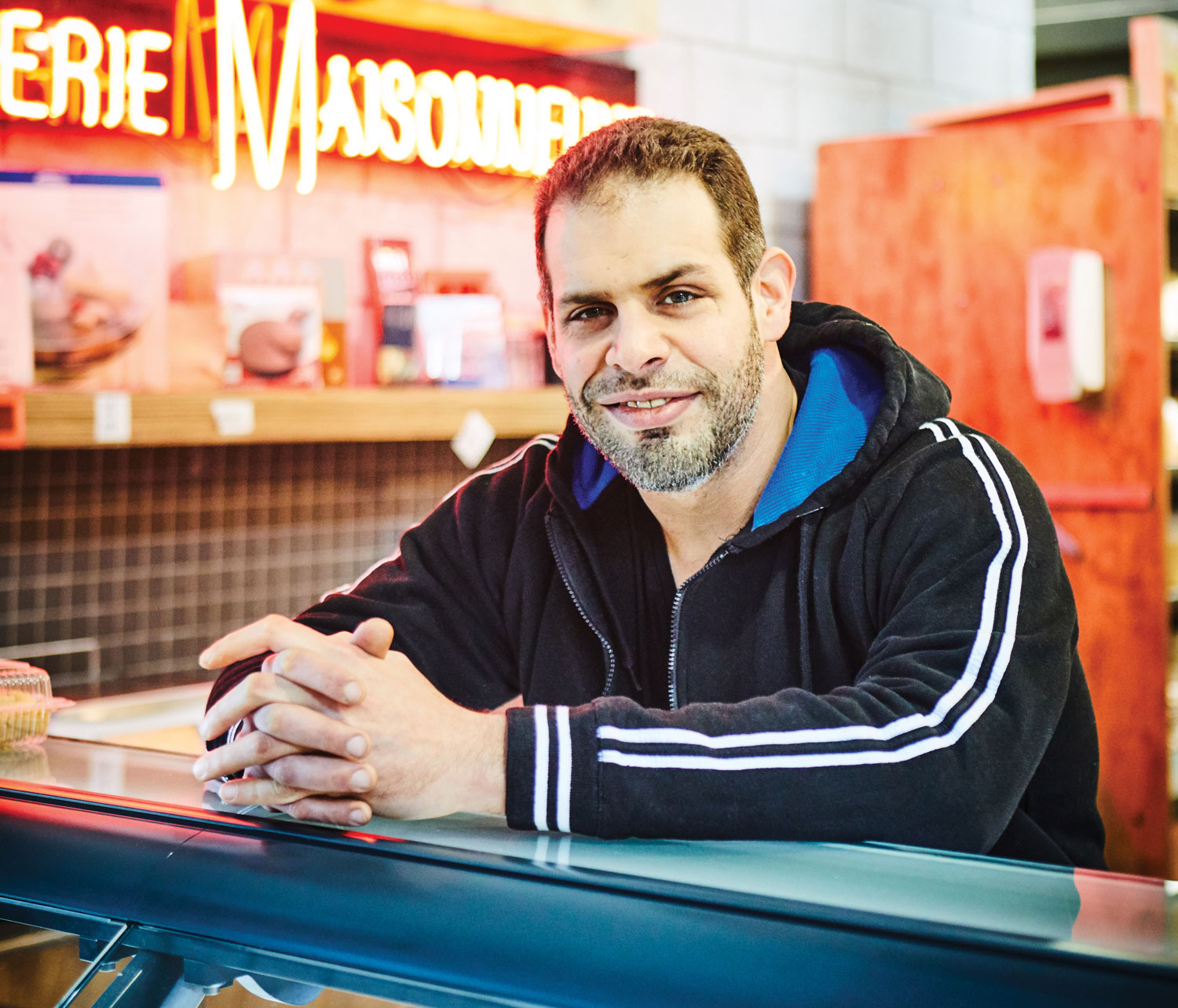 “You can’t buy happiness, but you can buy cheese, and it’s much the same!” goes the saying. The adage takes on its full meaning when admiring the tempting cheese display that takes up most of the Fromagerie Maisonneuve space, at the namesake market in the Hochelaga-Maisonneuve neighbourhood.

Between filling out orders and serving customers, Ibrahim Abdelgawad, who now runs the cheese shop founded by his father Hussein in 1985, takes me to the back room of the narrow, open-plan shop. There, he pulls a golden baklava out of the oven, filling the room with a wonderfully sweet aroma. His bashful face lights up with a broad smile as he hands me a honey-drenched pastry. “My father was making this recipe before he came here,” he tells me proudly. “Now, my brother makes the baklava. I guarantee you’ve never eaten such good ones.”

From Father to Son

For a long time, these pastries – which his father Hussein Abdelgawad was selling wholesale as far away as New York and Calgary – served to support the cheese shop which only became profitable about 15 years ago. Born in Egypt, Hussein started a family with a woman from Abitibi and got into the cheese business coincidentally after briefly partnering with a cheesemaker friend. “The first winters, my father often sold only twenty dollars’ worth of cheese a day,” recalls Ibrahim, who was only two when his father opened the shop with an offering nowhere near the 400 or so varieties of European and Québec cheeses that line the counters today. “There were about thirty of them, Oka, Jarlsberg, Brie…” says Ibrahim. Despite the limited choice, the cheese shop was the only shop open all year-round at the Maisonneuve Market, which was then located in a certified heritage building. Since the market moved in 1995 to its new building next door on Ontario Street, a dozen shops are now also open year-round.

So, it’s with “patience and lots of effort” that Hussein Abdelgawad won his gamble. His son recalls the many months of his youth when they rarely had meat on the table because his parents lacked the means. In his opinion, this contributed to making the Abdelgawad clan “simple, not at all materialistic folks who’ve never forgotten how far they’ve come.”

That’s just one of the reasons why he decided to take over the family business, even though he initially had little intention of following in his father’s footsteps. When his dad had to slow down after undergoing heart surgery, Ibrahim got his wake-up call: “After seeing my father work so hard, I couldn’t allow myself to let the cheese shop close down,” he says in a calm, thoughtful manner.

He still works closely with his older, but very energetic parents. “My mother and father are still very active. They haven’t slowed down much. The day they retire, it’ll be very different, but for now they’re with me a lot of the time. I’m going to make sure I keep the momentum going.”

Evolving with the Momentum

This career move led to another since, by his own admission, young Ibrahim was not a big fan of very tasty cheeses like blue or goat cheeses. Today, he is no longer satisfied with “mild little cheeses”. This 30-year-old epicurean, who invokes his family’s Mediterranean blood to explain his love of good food, now knows the flavours of his products like a sommelier knows the aromas of his wines. He doesn’t hesitate to invite his customers to taste his new arrivals while defining the particularities of each cheese to the people he serves. “In recent years, Hochelaga has become the new Plateau,” he says, pointing out that the Maisonneuve Market, although much smaller than its Jean-Talon and Atwater counterparts, is increasingly attracting neighbourhood residents keen on discovering new gastronomic delights.

“I have very loyal customers. I know them by name,” says Ibrahim, with a sparkle in his eye. “These people make me happy to work six days a week. I know their problems, joys and sorrows.” There are even mothers he’s seen pregnant and whose children have grown up before his eyes, “Their kids are what put me in the best mood,” he says with a big smile.

For Ibrahim Abdelgawad, family is truly a priority. In addition to the students he hires, his brothers Ahmed and Mahmoud come help out regularly. At 70, their father still spends a few hours at the shop two or three days a week, “To show who’s still the boss!” laughs Ibrahim.