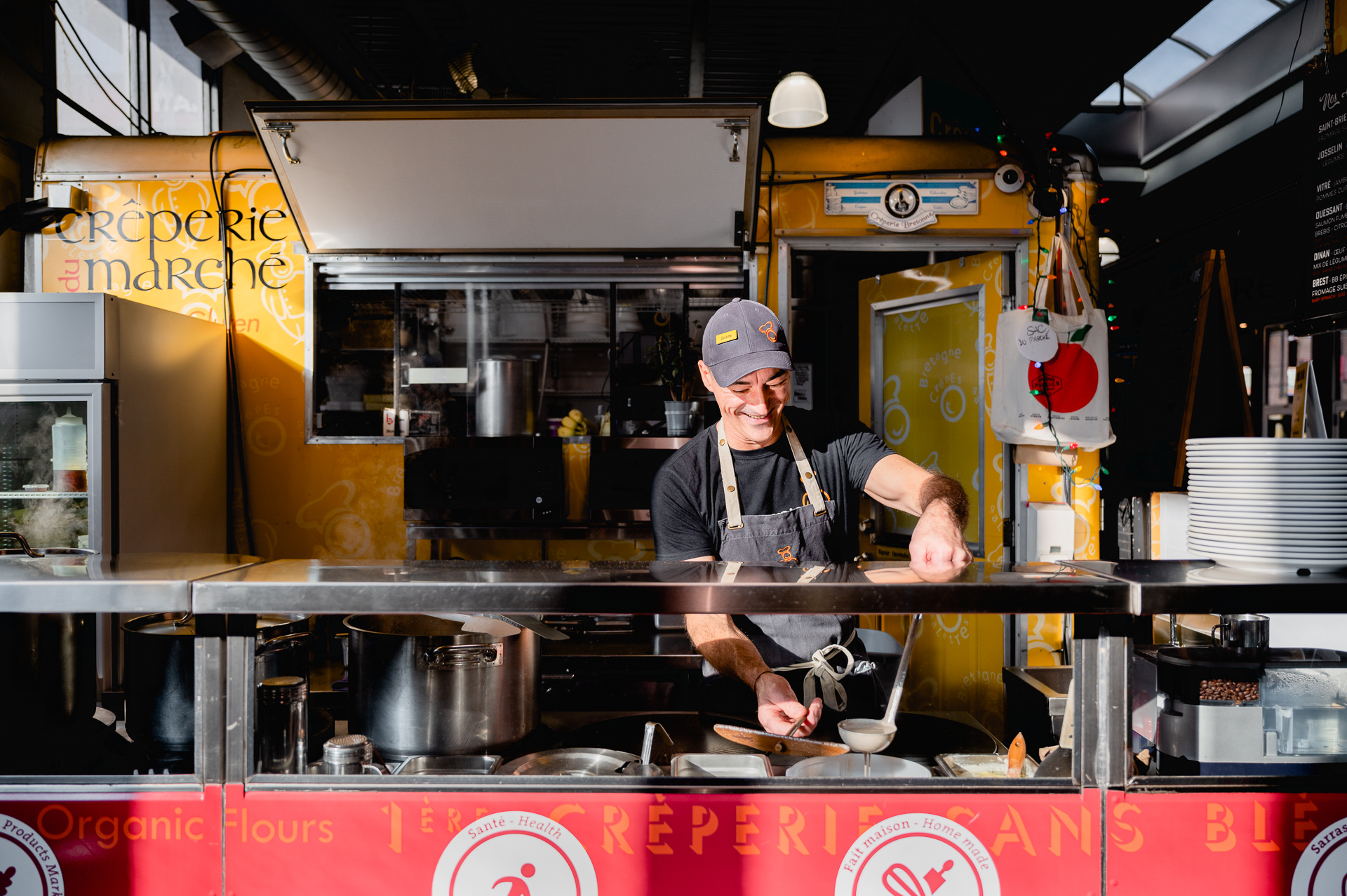 Sometimes, happiness comes from the smallest of things, like a smile or passing thought. And sometimes it comes in the form of a delicious crêpe. That’s Jérôme Arlabosse’s opinion anyway, the owner of the Crêperie du Marché located at Jean-Talon Market for the past fifteen years. His love affair with crêpes began long ago, when he started working in a friend’s family restaurant in Josselin, Brittany, as a student. “I had the good fortune to learn from a family that had operated a restaurant for five generations. It was Marie-Thérèse, the mother, who passed on her passion to me. In the kitchen, while we were stirring the dough, we were always talking about this Breton tradition rooted in the land. It’s something that interested me right away.” Serendipity brought Jérôme to Québec in 2001, where he opened a Bed & Breakfast in a Sainte-Adèle building that had housed, without his knowing it, one of the first crêperies in Québec. Besides welcoming guests and serving them his crêpes, he also helped out his fellow restaurateurs in the area. That’s when he first heard about the Jean-Talon Market. 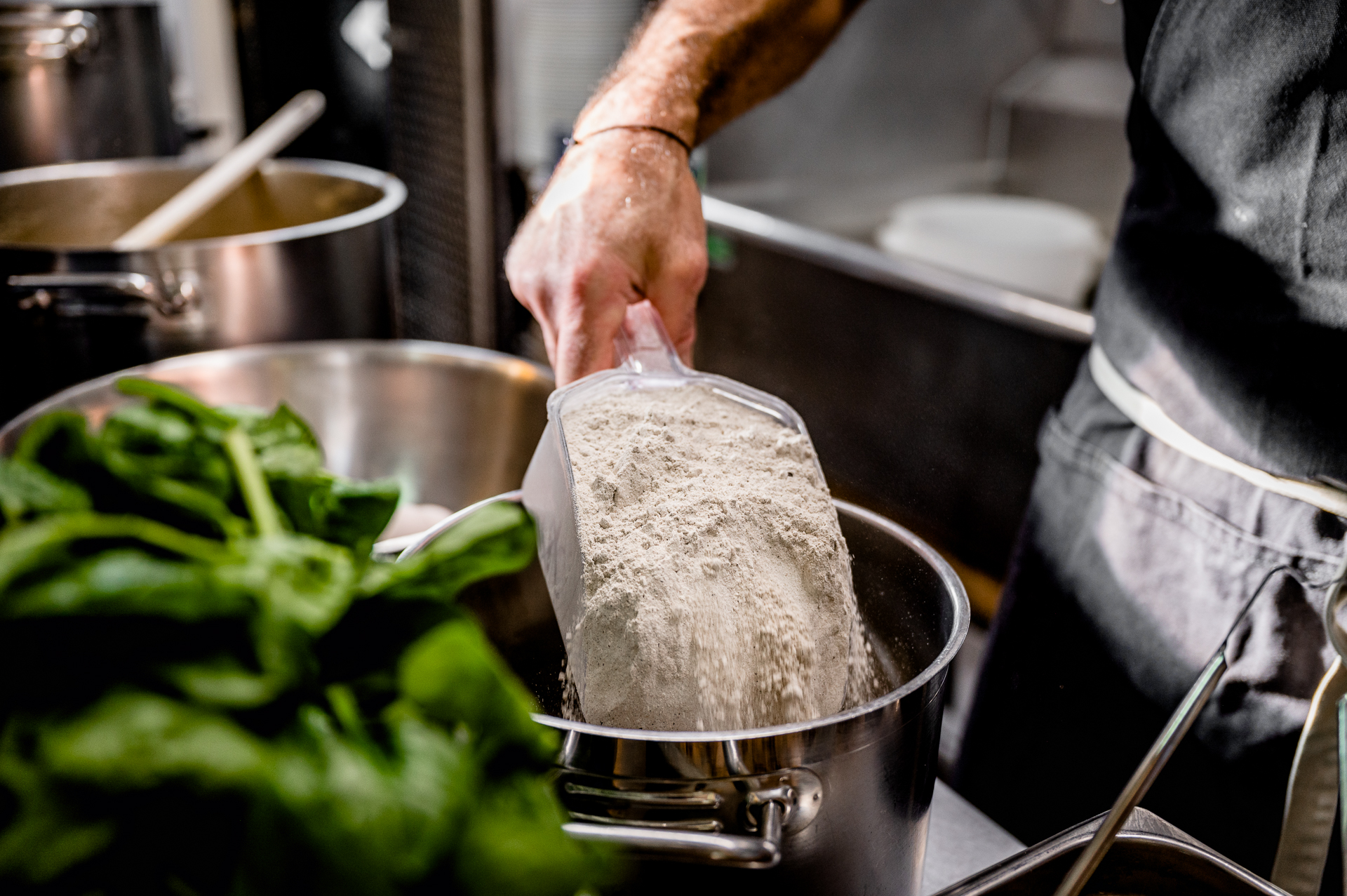 “I kept hearing the cooks saying that they had to go to Jean-Talon Market to get this or that ingredient. So I thought that I’d better go see this market for myself!” At the time, the market was expanding and looking for new tenants. Jérôme tried his luck and his crêperie project was accepted, first as a summer kiosk in 2005, then, from 2008, on a year-round basis. After a difficult start, the business finally took off. “It wasn’t in Quebecers’ customs or eating habits to have crêpes as a meal. We arrived after the Breton crêperies fad of the 60s to 80s. The craze had died out. We had to work very hard to bring it back,” he frankly admits. 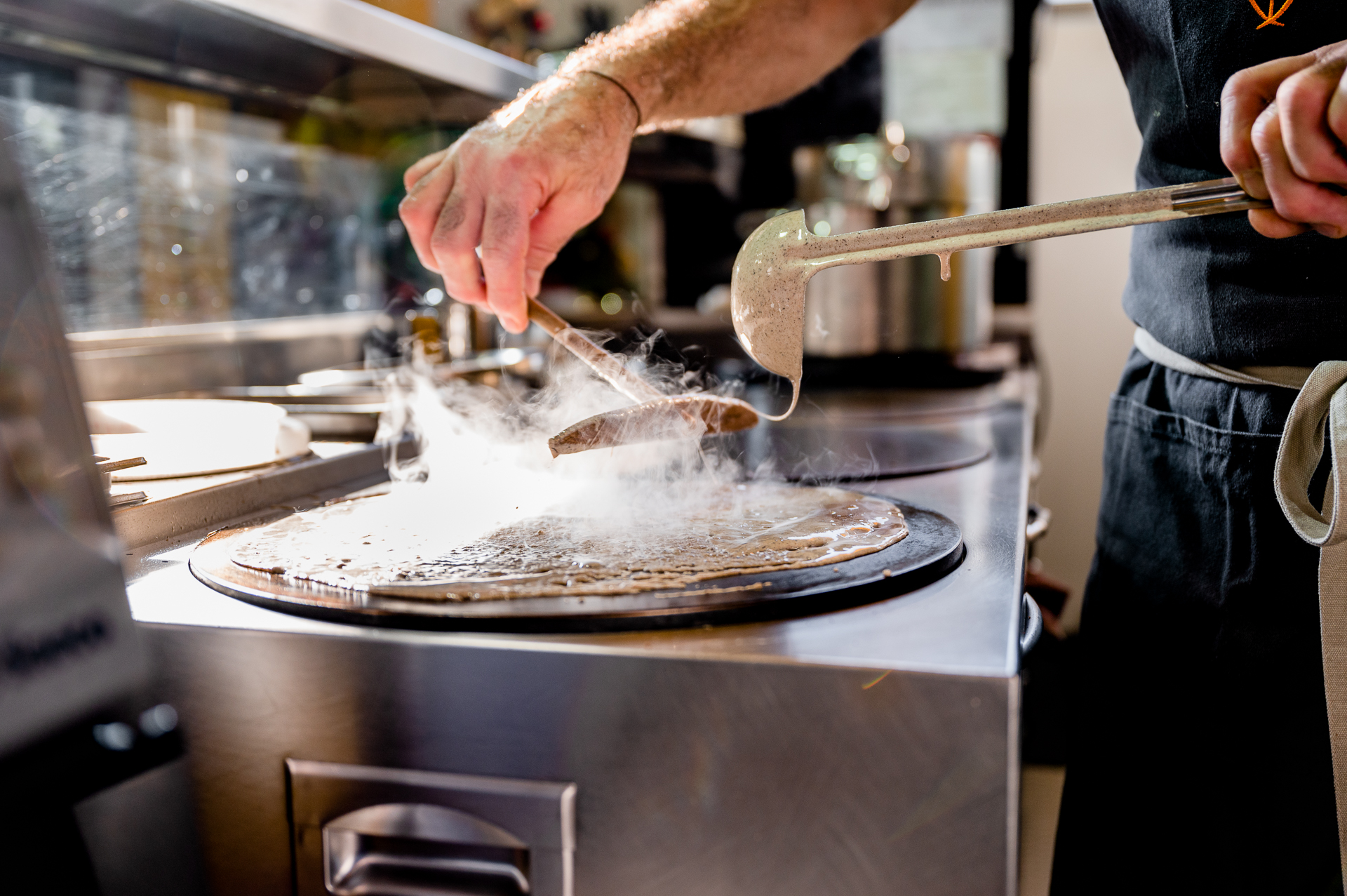 Organic and gluten-free happiness merchant
The Frenchman who has been living in Québec for two decades has made happiness his mantra, and quality his goal. This is what it takes to become a “happiness merchant”, as he calls himself with a smile. “About seven years ago, I started to think about how to work differently, how to innovate,” says the 53-year-old. “I wanted to improve the crêperie and bring into it my vision of food.” Since then, his crêperie has begun what Jérôme calls its “healthy shift”. Eighty percent of the food is now organic, starting with the flours which are also gluten-free. The restaurant also avoids cow’s milk, favouring vegetable substitutes such as oat, coconut or rice milks. Industrial eggs and refined sugar are also out; the company sources as much as possible from local or fair-trade producers. 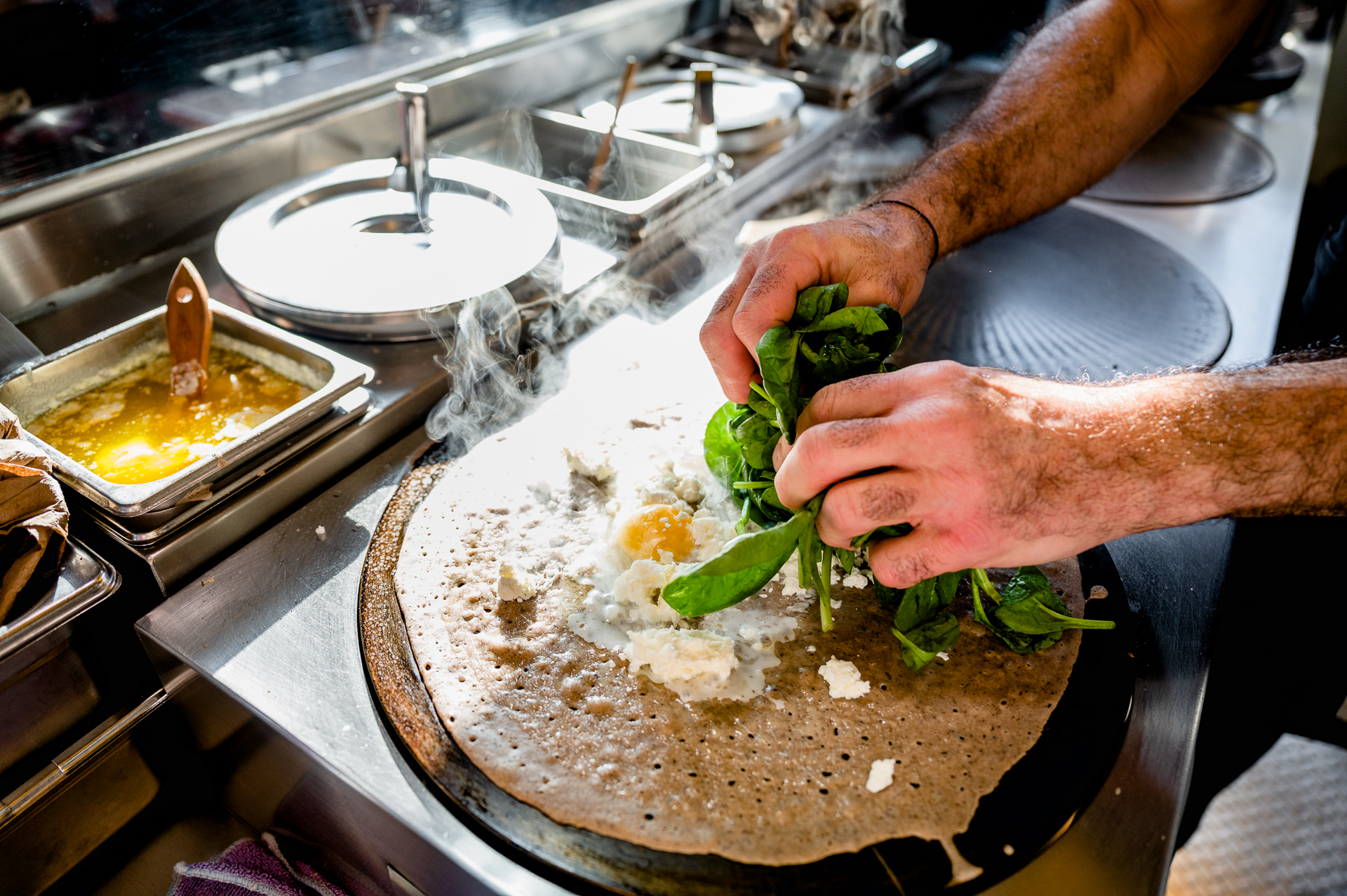 “The idea was to please as many people as possible and to create healthy pancakes with the best products we can find,” he says. Jérôme Arlabosse says his smile – which didn’t fade for a second throughout our interview – is a tribute to the love for the job he has been doing for many years. “I’m very passionate about what I do. As soon as I get my hands in the buckwheat dough, I’m in another world. For me, it’s like doing tai chi,” he says laughing. Jérôme has done so well that his restaurant is now on a roll and has become one of the market’s must-try spots, thanks to its high-quality crêpes. However, success is not about to go to his head and distract him from his quest: to bring Breton culture and fresh food to Jean-Talon Market. All this with a smile, which is the best ingredient in all his crêpes! 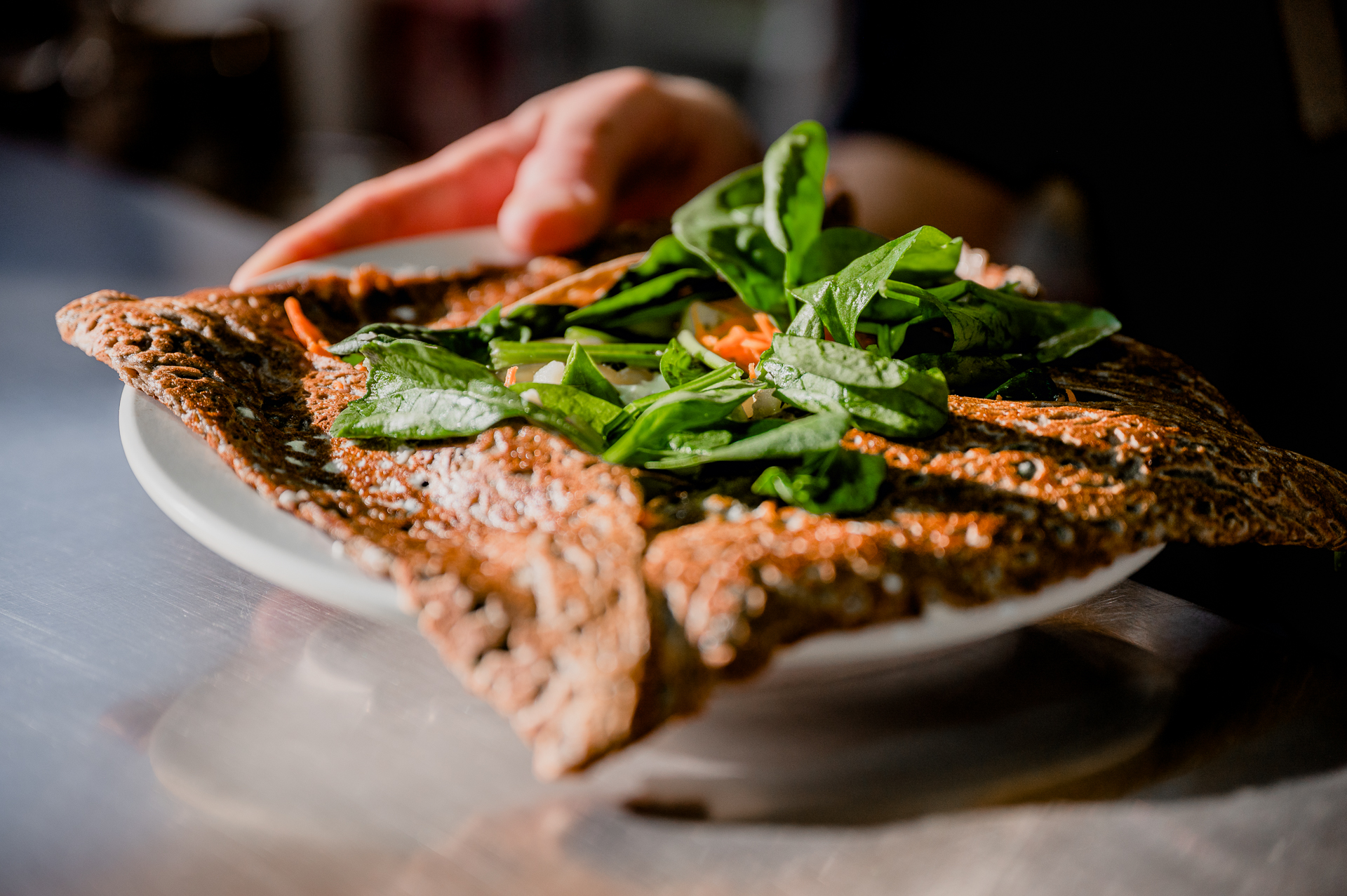 A few words to describe the market’s atmosphere?
Diversity, colours and scents! A signature crepe that is a must when visiting your shop.
The Josselin crêpe: egg, cheese, ham, béchamel sauce, mushrooms. It’s my favourite crêpe. Its name reflects my origins. And it’s one of the most popular crêpes. What motivates you to get up so early in the morning?
To make my customers happy!
Text by Benoit Valois-Nadeau,Caribou magazine
Photos by Dominique Viau, Bodoüm Photographie