Opened in July, 2000, in the Jean-Talon Market, local products pioneer, the Marché des Saveurs du Québec paved the way in making small regional agri-food artisans’ creations more easily accessible. Today, the local specialty shop is still the place to go to stock up on local products – some of them exclusive – and, above all, to get good advice on how to cook them. Marché des Saveurs du Québec is first and foremost a family story. It’s the story of Suzanne Bergeron and Tony Drouin, who initiated the project a little more than 20 years ago, and of their daughter Isabelle, who has since taken over with her husband, Simon Beaudoin. “We were still in school,” he recalls. “Isabelle’s parents were pioneers selling Québec spirits. They had a shop in the Maisonneuve Market and hired me to help set up a new shop dedicated to local products and to manage the site. I got my foot in the door, as they say, and I never left!” So did Isabelle, who joined them shortly after completing a bachelor’s degree in HR. “I never imagined a career in retail, but I realized that working in an office five days a week was not for me,” says Isabelle, who truly enjoys meeting the shop’s customers. 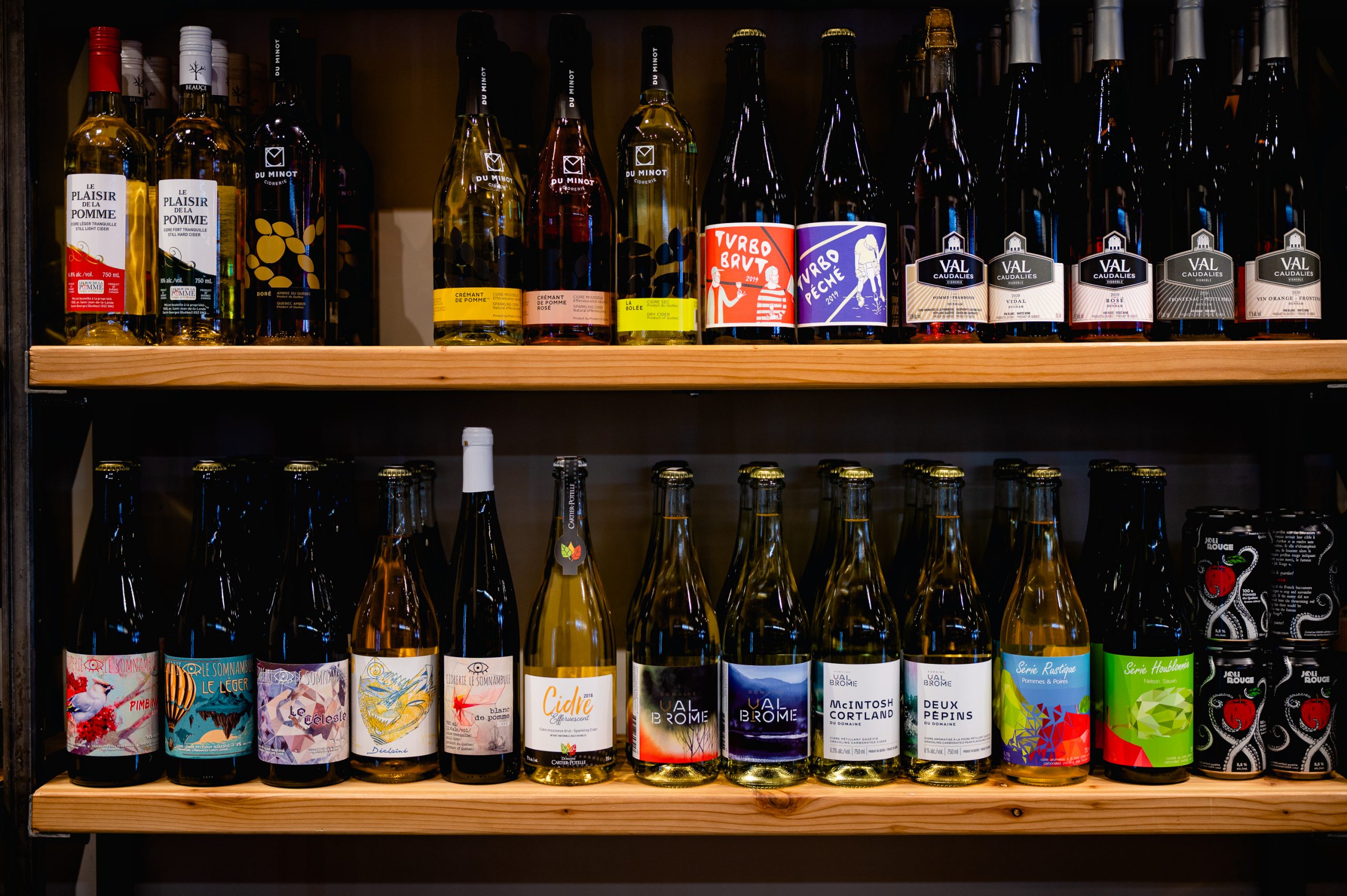 It’s important to remember that at the turn of the millennium, Québec’s local products were almost impossible to find. “You had to go outside the city,” says Simon. “You couldn’t find them in Montréal, even if there was a demand. The timing was perfect, so we didn’t have to twist the artisans’ arm to put their products on the shelves. They approached us,” he says. Marché des Saveurs had already taken on the mission of becoming the place where people could make culinary discoveries. “When we opened, it was new for everyone,” recalls Simon. “So we got used to answering lots of questions,” adds Isabelle. “It’s our role to be available and to find answers to everything, even the most difficult questions. It’s always been part of the shop’s DNA. It’s also why customers remain loyal year after year.” In fact, the two owners like to think that their business still stands out, thanks to the expertise and knowledge of the products of some 400 regional artisans and processors, microbrewers, cider makers and winemakers that they and their team have developed over the past 20 years. “The artisans we work with hold no secrets for us. I would say that customer service has become our specialty,” says Simon. “Today, people come to us because we advise them well.” 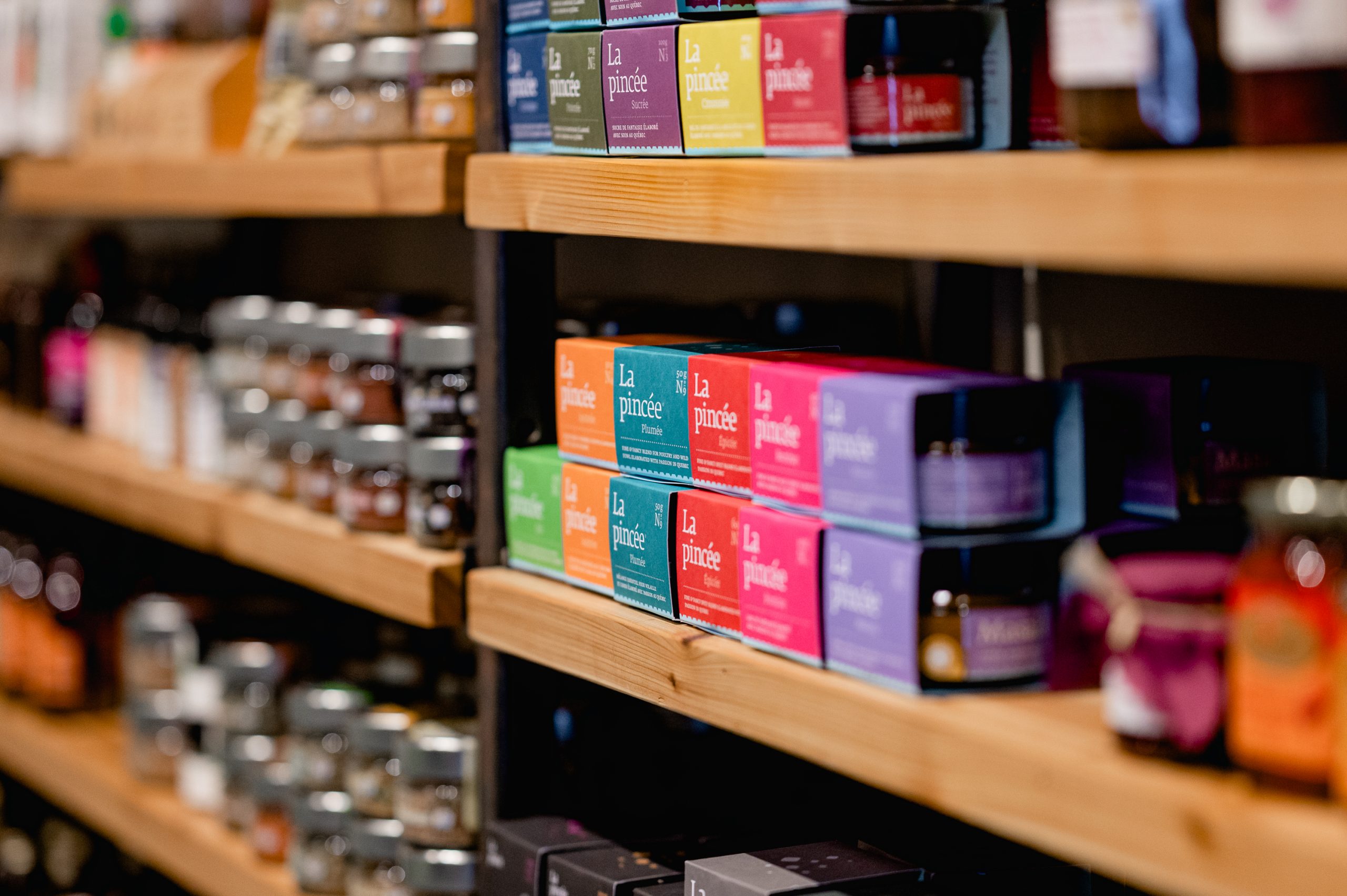 It’s true: while it’s easier these days to buy homemade jams, marinades, oils, vinegars, northern spice blends, dried mushrooms, sauces, flours, granolas, cheeses and Québec wines online – or even at the grocery shop – there’s no one to turn to when you have questions. No one is in a better position than the specialists at Marché des Saveurs to tell us how to prepare our daisy button capers or which Québec orange wine to serve to accompany a platter of Québec cheeses! The democratization of local products
Isabelle and Simon had front row seats when the local food craze took off. “It’s not that long ago, maybe ten years, since the buying local phenomenon took off,” says Simon. “We’ve been lucky enough to witness the birth of a lot of new businesses.” And the multiplication of sales outlets dedicated to local foods. They even paved the way for the sale of artisanal alcoholic products in retail outlets. A good thing, according to the duo: “Regional products are now shining as they should,” they say, delighted. In order to stand out, Marché des Saveurs relies on a unique and exclusive offer made up of, among other things, dishes prepared on the spot – pâtés, rillettes, ham, tourtières, etc. – and free-range eggs from small producers that simply “fly off the shelves.” “For the eggs, we have to take reservations!” claims Isabelle. 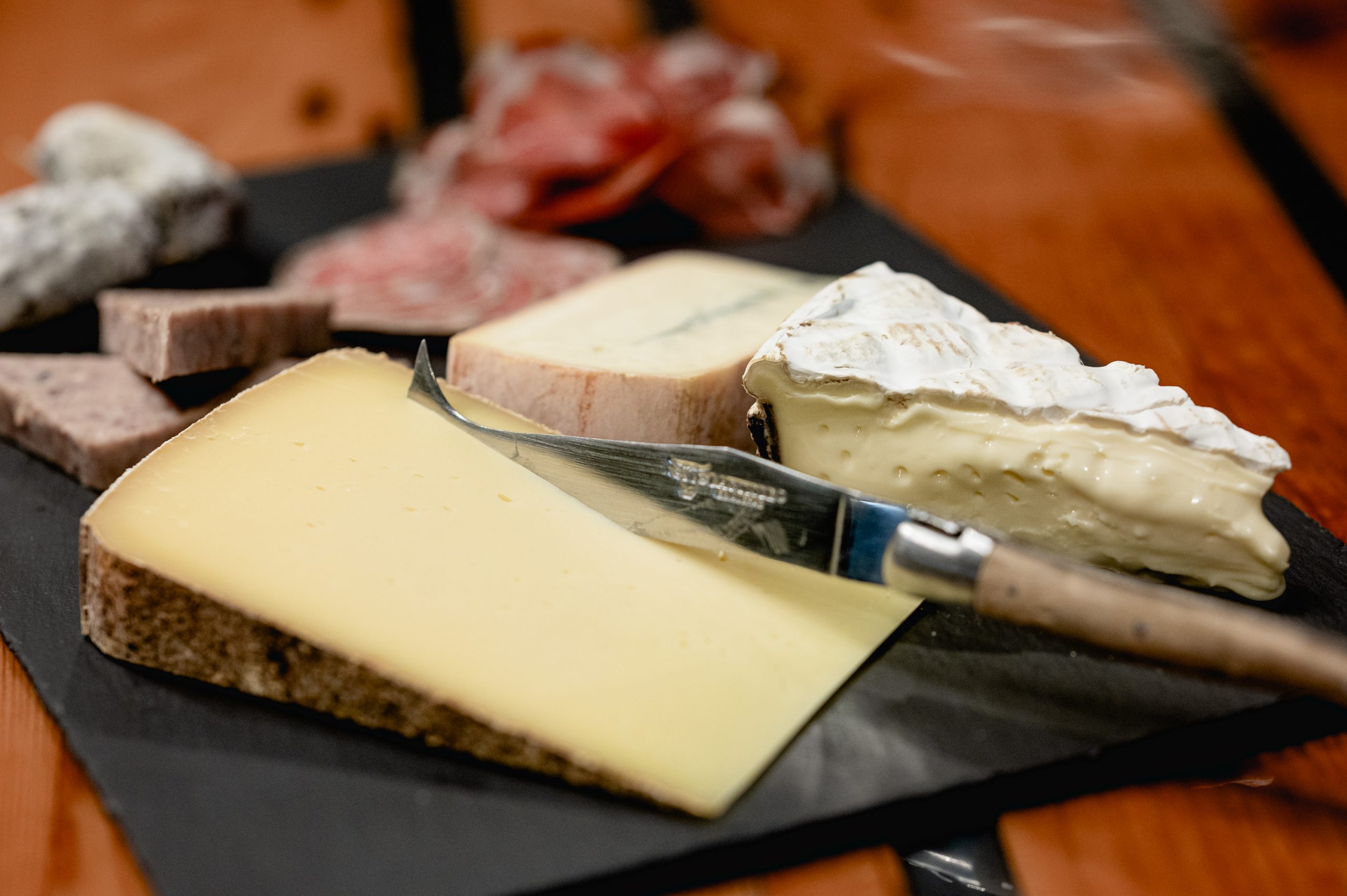 The cheese counter, the shop’s flagship, has evolved and gained in variety with some 225 cheeses from here (mostly) and elsewhere, in addition to several exclusives, such as the occasional wheel of 3-year-old Louis d’Or from Fromagerie du Presbytère or some cheese creations from Mariposa Farm in Ontario, which can’t be found anywhere else. “This is the only category where we’ve been flexible enough to add cheeses that are not made in Québec, such as Parmesan, in order to meet demand,” explains Simon, adding that the counter still has 90% Québec cheeses, many of which are organic. In order to further distinguish itself, the team recently integrated a Dans la Côte butcher shop counter run by butcher David Aghapekian. His specialty: local meats from small Québec producers, such as pork from Lennon Farm. “The ultimate project, slowed down by the pandemic, will be to add a restaurant component to our butcher’s counter where customers can eat a sandwich while chatting with the butchers,” says Isabelle, noting that for now, sandwiches are “to go” only. “Our goal is for people to come in here and have a distinctive global experience.” Quick questions to Isabelle Drouin Your best memory of the market?
Going to the market with my grandmother. Thanks to her, I love to cook and I care about the quality and origin of the products I buy.  What products can be found at Marché des Saveurs since the shop’s opening?
There are many, for example wines from L’Orpailleur, products from Gourmet Sauvage, spreads from Simon Turcotte Confiturier and flour from La Seigneurie des Aulnaies. We started with 30 producers and we now have over 400. The local product that can always be found in your fridge?
Cheese! It’s a very versatile staple and we love it. Jessica Dostie, Caribou magazine
Photos by Dominique Viau, Bodoüm Photographie

Read all the FAMILY PORTRAITS