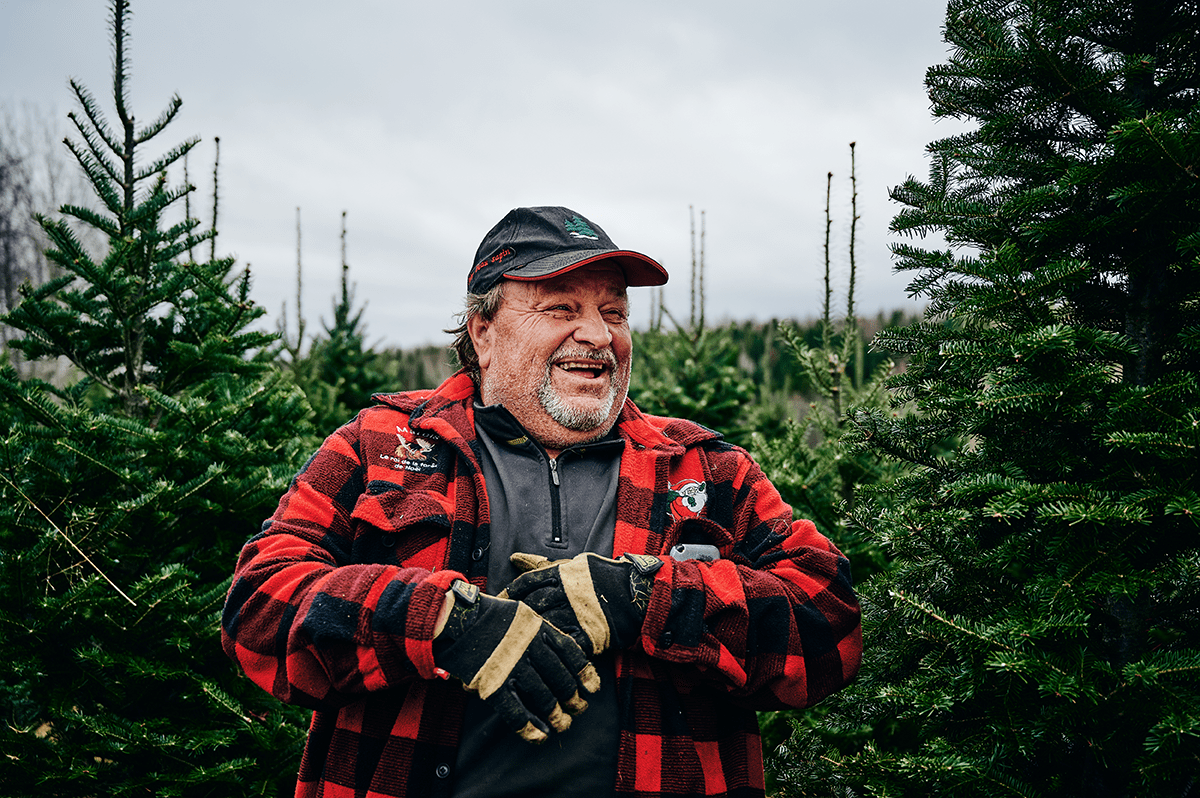 Walking through his plantations, Christian Marois marvels at the beauty and majesty of his trees. He feels a surge of pride. “My trees are the apple of my eye. I pamper them, I talk to them. They represent festivities, gatherings, tradition,” he says. Christian is truly delighted that his work brings joy to families at Christmas.

The producer from Saint-Joachim-de-Shefford, in the Eastern Townships, sells around 4,000 fir trees – the King of the Christmas Forest – every year at his Atwater Market kiosk in Montréal. From mid-November onwards, he works full-time at the market… and he has been doing so for over half a century! “I was already helping my father at the market when I was eight years old. As far as I can remember, I never went to school in December. I was selling Christmas trees. I’d run ahead of my dad to greet customers!”

His father started selling fir trees at Atwater Market in 1958. “At that time, there were no fir plantations. My father sold natural, wild fir trees that grew on his land. He also bought some from neighbours who needed money to pay their municipal taxes. He was secretary-treasurer of the municipality of Saint-Joachim-de-Shefford. So, he’d drive all the way to Montréal to sell them. He was a forward thinker.” 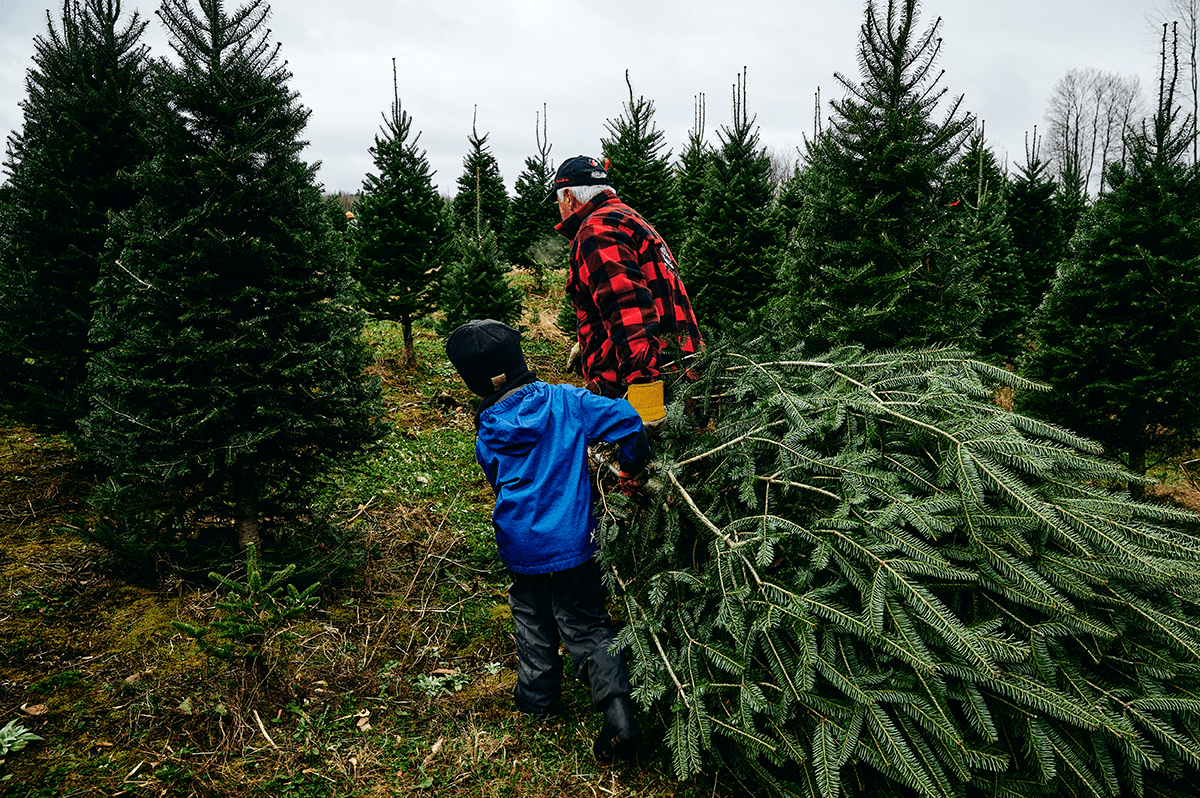 Christian Marois and his three brothers took over the production and sale of fir trees. Two of them have since retired. Christian and his brother Richard each have their own fir production on the family land. The family owns and leases 150 acres of cultivated trees and 300 acres of farmland with wild trees, that is unpruned, imperfect and sparse balsam firs.

Christian and Richard each have their own tree stand at Atwater Market. “It’s a family business, but we’re competing all the same which is fair game!” They also each have their own year-round stand where they sell maple products, honey, fruits, and vegetables they produce in part on the family land. They also sell local products, including greenhouse vegetables from producers in Saint-Joachim-de-Shefford.

Christian’s son follows in his footsteps. “It’s a family affair, a passion.” Last summer, his three grandchildren and his daughter-in-law helped him plant trees. “They’ll see them grow and be able to cut them down in a few years’ time,” he says, moved. 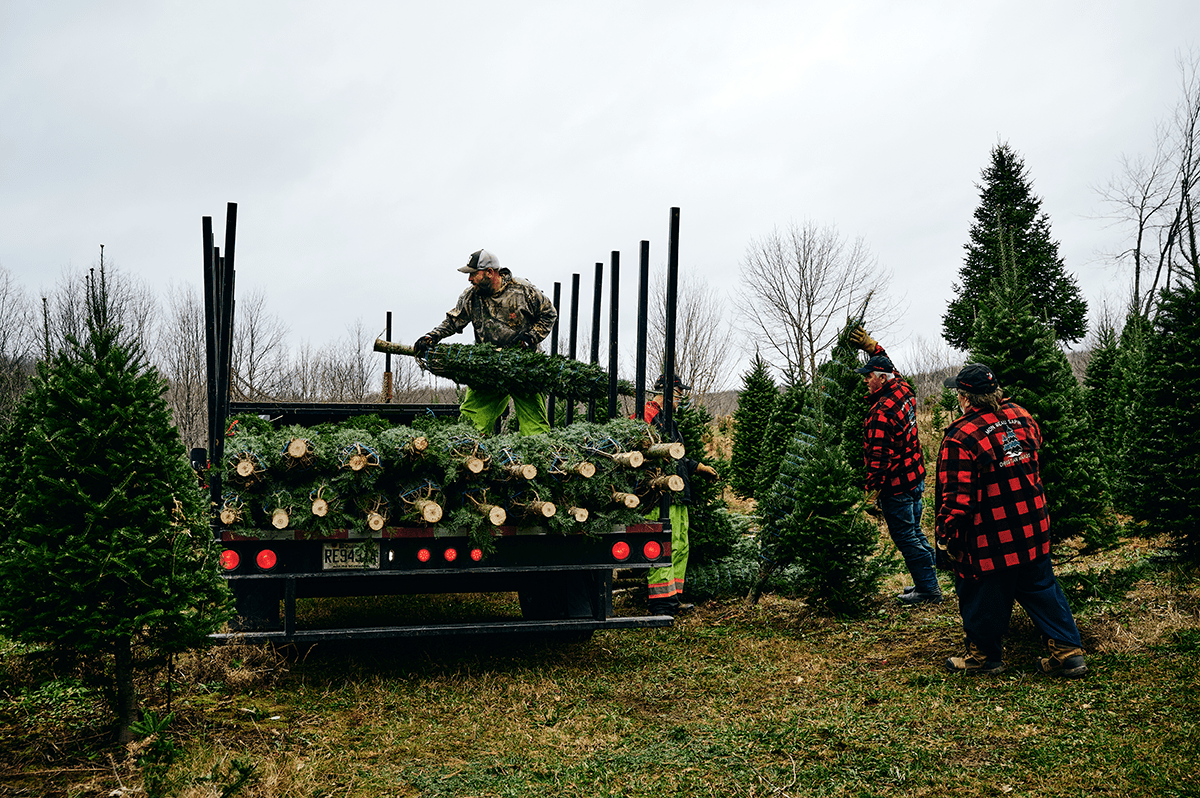 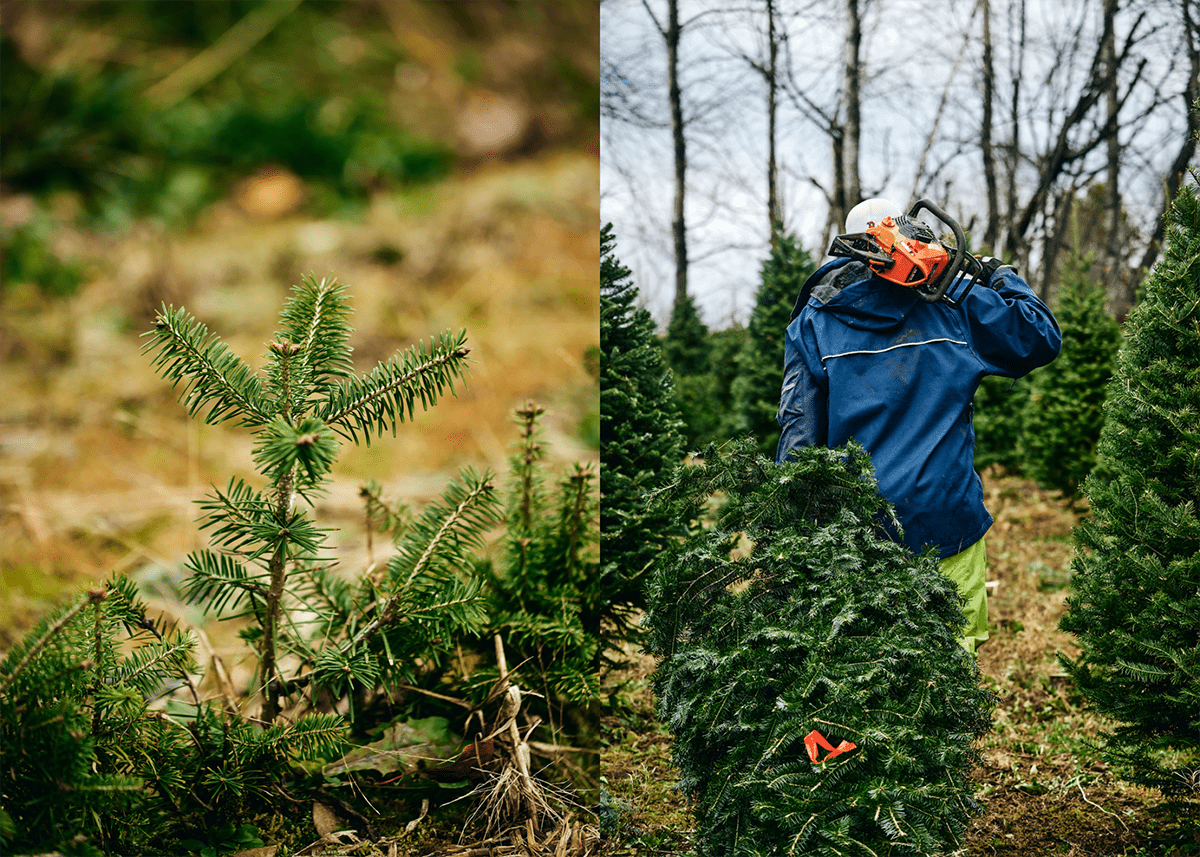 About ten days before Halloween, Christian Marois is busy planning felling the year’s firs. He inspects his trees, cuts unnecessary or dead branches, checks the machinery and sets up camps, cabins and trailers. “We have land as far as Coaticook, about 90 kilometres from the farm. When we go there, we sleep on the spot. We cut from morning until night.” The work is very physical, and the lack of manpower can take its toll. “I’m not getting any younger, it’s less and less easy. It’s a good thing that I can count on my nieces and nephews. It’s a family effort.”

Most felling is done on weekends. “During the week we all have our jobs. I’m a beef farmer, a maple syrup producer and a school bus driver. My father started a transportation company and my brothers and I always had routes.” So, during the week, felling takes place on nearby land. 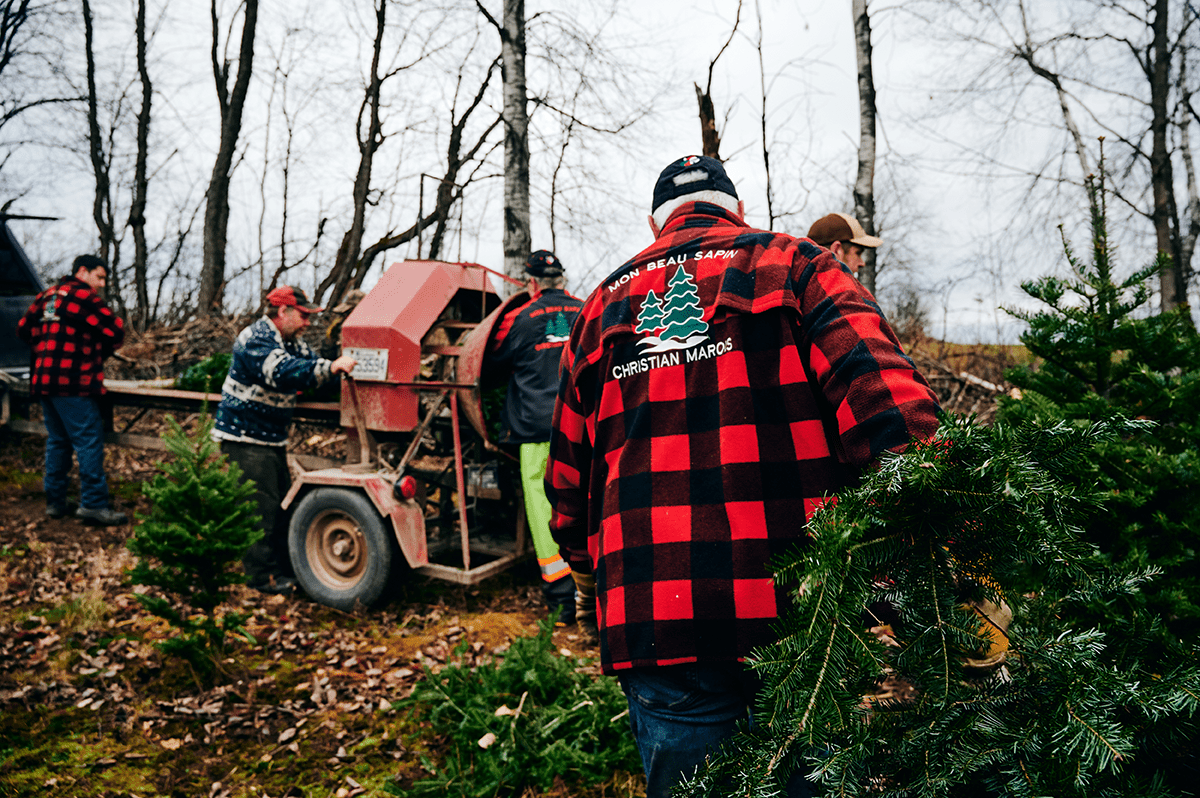 Year after year, Christian Marois is excited when it’s time to return to the market. “I love the contact with the customers. They’re happy, in a good mood.” The children stop in front of his cabin topped by a giant Santa and marvel at the many wooden animals. “I like to see the magic in their eyes.” Like Christian, some customers have been coming to the market since childhood. Today they come with their children and grandchildren. “It’s a very special bond.”

But selling at the market can be tricky at times. Christian recalls an episode of ice rain that left the market under a thick layer of ice for days. “We couldn’t get the trees out of our display! It was a nightmare. I had a few sleepless nights.”

On December 24, when the market closes, Christian Marois dismantles his cabin and packs up his goods. Behind the wheel of his truck, a wave of nostalgia overcomes him. “I drive around the empty market, I stop at the traffic light and I see the spot where my cabin was. The Christmas Village is gone, it’s all gone. Every year I cry like a baby all the way to Taschereau Boulevard.”

Exhausted, he quietly celebrates Christmas Eve with his companion. They eat local cheeses and tourtière brought back from the market. “At midnight mass, I fall asleep before communion!” On Christmas morning, he goes to the barn to greet his cows which he has missed. The festivities can then begin. Surrounded by his grandchildren, he gazes at the decorated tree in the living room, filled with joy. 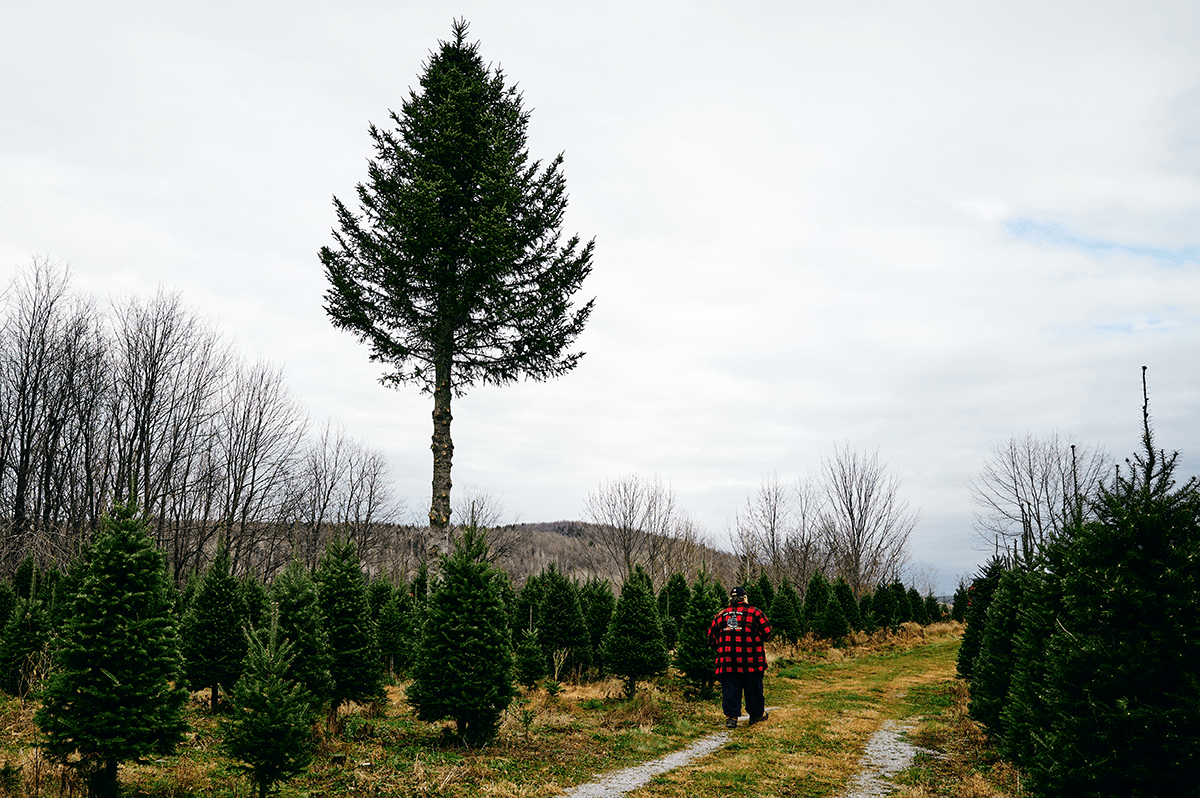 From the seedling to full maturity, a fir tree takes seven years to grow.  Every year, Christian Marois makes sure that he replants 10 to 20% more trees than he cuts down. “We’re doing our share to increase the number of trees on the planet.” Unsold trees are recovered to make essential oil, while trees that are too dry are chipped.

What motivates you to get up in the morning?

What are your fondest memories on the farm?

Coming back in the middle of the night after cutting trees with my parents in our small truck loaded to the hilt. The mood was festive!