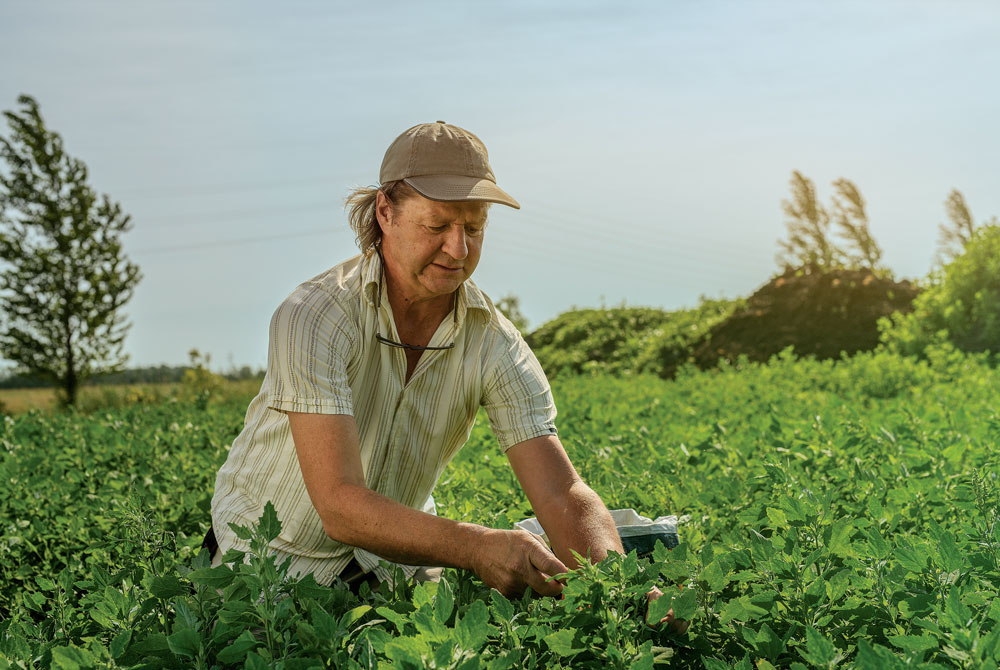 For François Brouillard, a mound of weeds is quickly transformed into a plentiful pantry. “There’s no such thing as weeds. They’re just plants that don’t grow in the right place,” says this experienced forager as he heads for a patch of goosefoot – a green-leafed plant that very much looks like, well, weed.

A “good spot” where unloved plants are welcome is the 20-square-metre heap of soil and broken plants at the Pépinière Villeneuve, in L’Assomption. The amaranth, purslane, wild arugula and dandelion that proliferate there will be duly harvested, thanks to an agreement between François and the owner.

For the last 30 years, from spring until fall, from morning until night, the founder of Les Jardins Sauvages travels across Québec, from east to west and north to south, in search of indigenous plants, mushrooms and fruits. He sells them to a handful of restaurateurs in his Jean-Talon Market boutique or serves them at his wife’s gourmet table in Saint-Roch-de-l’Achigan.

This “forest forager” shares those flora with people who are interested in the delicacies that have been growing throughout Québec for centuries. “Amerindians have always eaten goosefoot and fiddleheads. These plants are part of our terroir. They’re delicious and nutritious, but that knowledge has been lost. The French replaced them with spinach and asparagus. Our northern climate also offers us a whole range of herbs, such as yarrow, milkweed flowers and sea parsley. And yet, we cook with rosemary, thyme and basil, which are not typical of Québec,” moans this enthusiast, while crouching in leaves to cut the head of a goosefoot plant with a pair of scissors.

Near the nursery, in the middle of the forest, François points out wine-red large stropharia mushrooms, blackberries, sorrel, wild carrots and sarsaparilla. You can tell that you’ve entered his world – and that of the Smurfs. “My strength is the forest. If you got lost in the woods with me, you certainly wouldn’t starve!” says the man who has been picking since the age of five, initially under the wise supervision of his parents and grandparents.

The formidable mushroom hunter is very proud of recently discovering Caesar’s mushroom growing grounds, a rare and impressive egg-shaped red-capped mushroom with a cheesy taste. All this due to a careful study of the climate and diligent research. “I hadn’t seen any in the last four years!”

A Resource in Need of Protection

Despite his passion for his job, François fears that the future of wild plants is anything but flourishing. There are very few qualified young people willing to work hard to gather large volumes of these plants. “There aren’t many good pickers. Young people don’t want to do this work, it’s too hard. You have to spend the whole day on your hands and knees to collect two gallons of field strawberries,” says the man, whose calves bear numerous marks left by thorny wild blackberry bushes.

At the same time, François has a grudge against those who improvise themselves as harvesters and put the resource at risk. He explains, for example, how meticulously one must harvest samphire, a marine plant that grows on the banks of the St. Lawrence. “On the first harvest of the season, we could pick 200 pounds, but we only pick 30 by cutting off the heads. Then you give the plant a week’s break, and all the side stems come out, like broccoli. By pruning gradually, I can harvest from the same plants for two months. But there are incompetent people who go in there and rip everything out!”

So don’t ask him where he picks because he won’t tell you. “My truck used to be identifiable. But it’s not anymore because when people saw it, they thought: “If Brouillard is there, it’s because there’s good stuff!” he says with a little bitterness in his voice.

The entrepreneur is calling for action. He is campaigning within the ACPFNL, the non-timber forest products marketing association, for more supervision and monitoring. “We should impose harvesting permits for a list of vulnerable plants and popular plants, starting with fiddleheads,” he says.

François does everything in his power to leave a good legacy: he continues to train environmentally friendly foragers, he raises public awareness and above all, he picks. “I’ll stop when I’m no longer able to go on. I intend to keep on picking until I’m 80. It’s very demanding physically, but there aren’t many young people who can keep up with me!”

After taking us on this guided tour of his world, François will bring a load of blackberries and chanterelles to Jean-Talon Market. Then, he’ll return in search of mushrooms, but in out-of-the-way places he’s determined to keep secret.