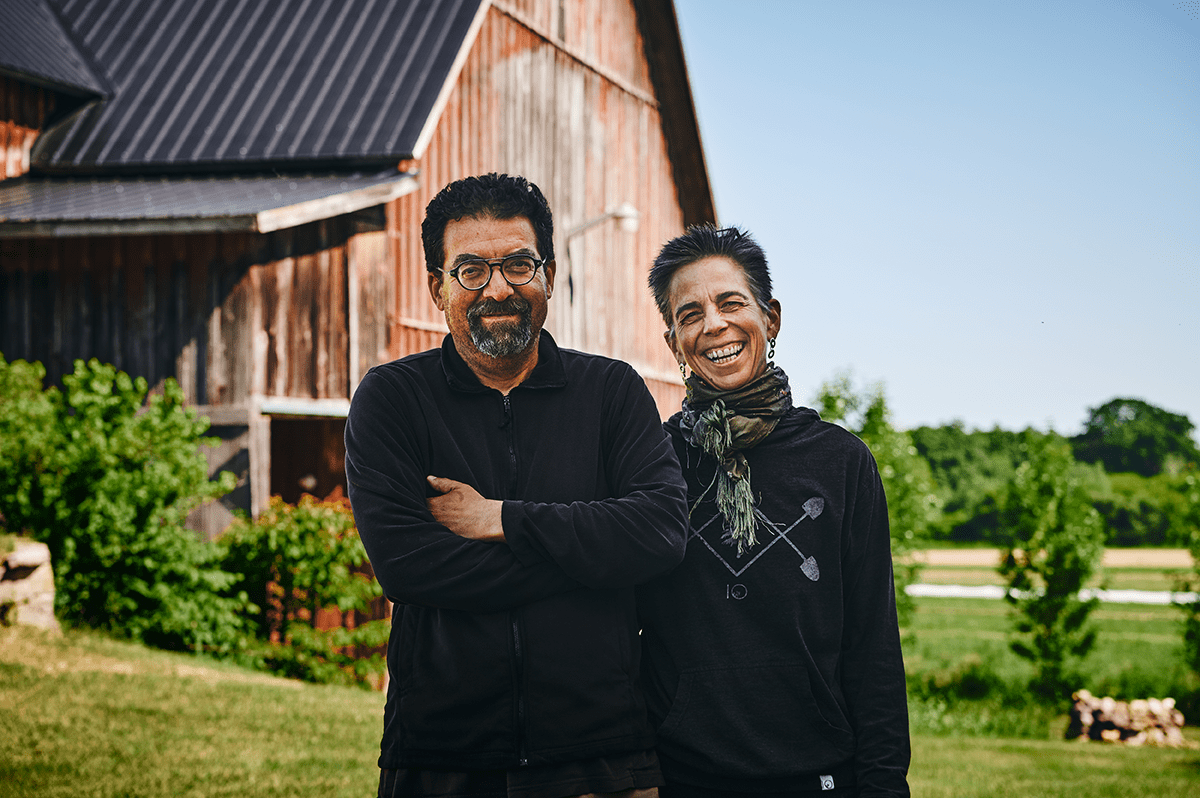 It’s a glorious Monday morning and Claire Lanctôt and Nasser Boumenna, owners of Jardins d’Arlington, are going back and forth between the cold storage room and the Bedford Volunteer Centre truck carrying boxes of vegetables. Once a week, they offer their surplus to the organization in an effort to reduce food waste and help their community. A perfectly natural thing to do for these committed and passionate market gardeners.

Located in Stanbridge East for the past 13 years, Claire and Nasser have put their heart and soul into producing quality organic fruits and vegetables which are either delivered in baskets to their members or sold from Friday to Sunday at the Atwater and Jean-Talon markets. However, nothing predestined those two to start farming: he worked in the field of arts and technology whereas she was an executive professional in corporate finance.

Montréal city dwellers and parents of four children, they nevertheless wished for a drastic change of life, a common project centred around the family. “We wanted to leave the city, move to the country and have an economically viable project. We were casual gardeners, we knew nothing about the trade,” says Nasser.

In 2008, the fortysomething couple, whose children were between 4 and 12, decided that the time was right. “If we were to realize our organic farming project, we had to take the plunge,” recalls the producer. In less than 24 hours, it was decided: their lives would change completely. “It was a leap of faith, a radical change,” they say in unison. 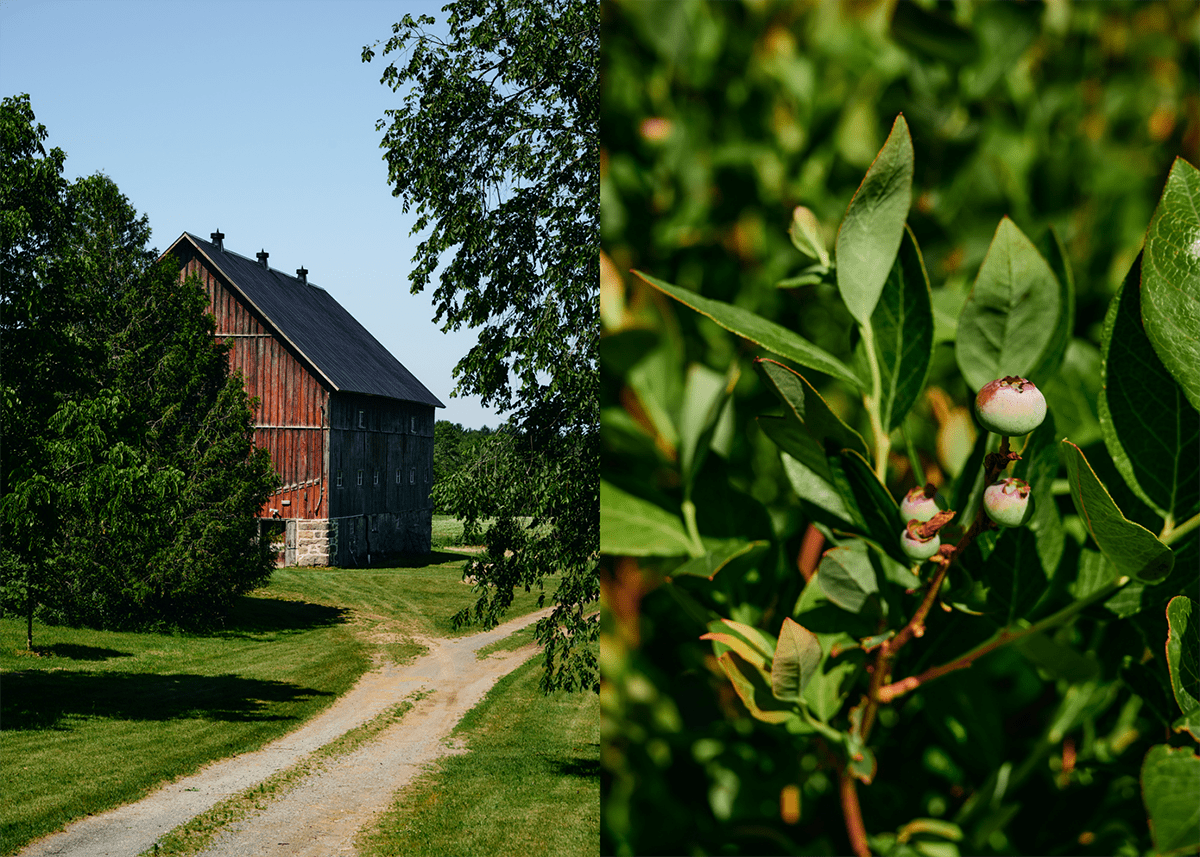 A War Widow and Her Flower Garden

The Montrealer began exploring the countryside of the Brome-Missisquoi region looking for land. He searched and searched, without much luck. As winter was setting in, he was told of an old dairy farm on North Road, in Stanbridge East. It was ten times bigger than they had anticipated: 130 acres.

With snowshoes on his feet and sparks in his eyes, he walked across the white expanse knowing that he was finally home. The farm had been for sale for two years, but the owner had turned down several offers. “She was a Scottish war widow who arrived after the Second World War,” explains Claire. “She had married a local man and raised her children here. She was keen to keep her farm alive.”

The old lady received the family in her small woodstove heated kitchen and offered them tea in her fine earthenware. “We instantly connected. It’s a beautiful story of passion handed down,” says Claire. “We would have loved to have her over later, but she had cancer and died. I think she’d have liked what we did with the place. The beautiful, colourful gardens near the house are her legacy. She used to say that a farm without a flower garden is not a farm,” she adds. “We maintain it alive as a tribute to her.”

The house was renovated and extended, the staff building was rebuilt and the dairy farm was converted to an organic market gardening farm. Today, Jardins d’Arlington is 25 acres of organic production, with a crop rotation and green fertilization. About 60 fruits and vegetables are grown: radishes, tomatoes, cabbage, chicory, squash, okra, ground cherries, melons and more. The rest has been converted to hay to increase production in the coming years.

The children, Djamel, Tarek, Imad and Yamina, jumped in with both feet. “The farm has brought a lot to us as a family,” says Claire. “As soon as we chose this lifestyle, I was much more available to them. The children love the farm and people are sometimes surprised at how easily they help us.” Everyone got their hands dirty, served customers at the kiosks, made deliveries. Djamel, 25, and Imad, 20, who’s studying agronomy at McGill University, could very well take over one day.

From the outset, the couple opted for diversified organic farming. “We did it and we continue to do it out of conviction, because we are concerned about our health, the planet and because we like to eat well,” explains the producer.

In order to do things right, Nasser went back to school. Alongside young people aged 18 to 21, he studied farm business management at the Saint-Jean-sur-Richelieu CEGEP. He did an internship with a local farmer who helped him start his project. He was also able to count on the Réseau des fermiers et fermières de famille in which he is now very involved. 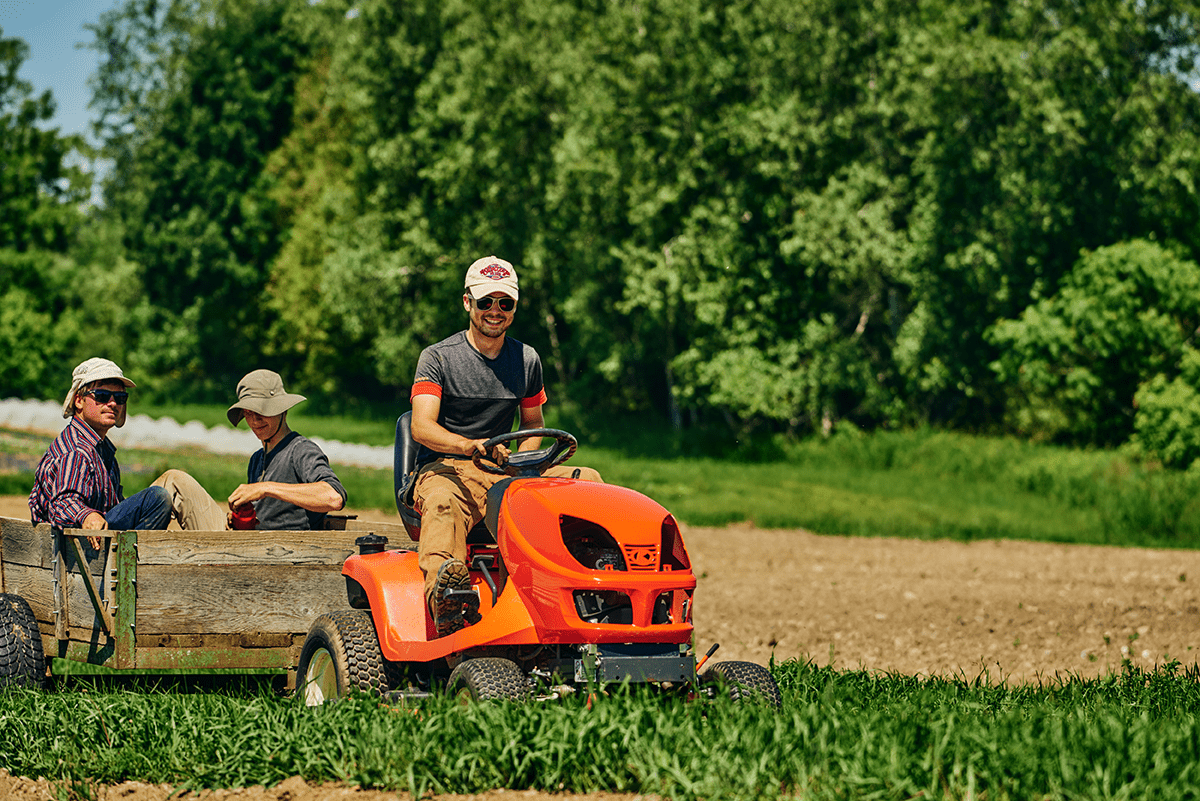 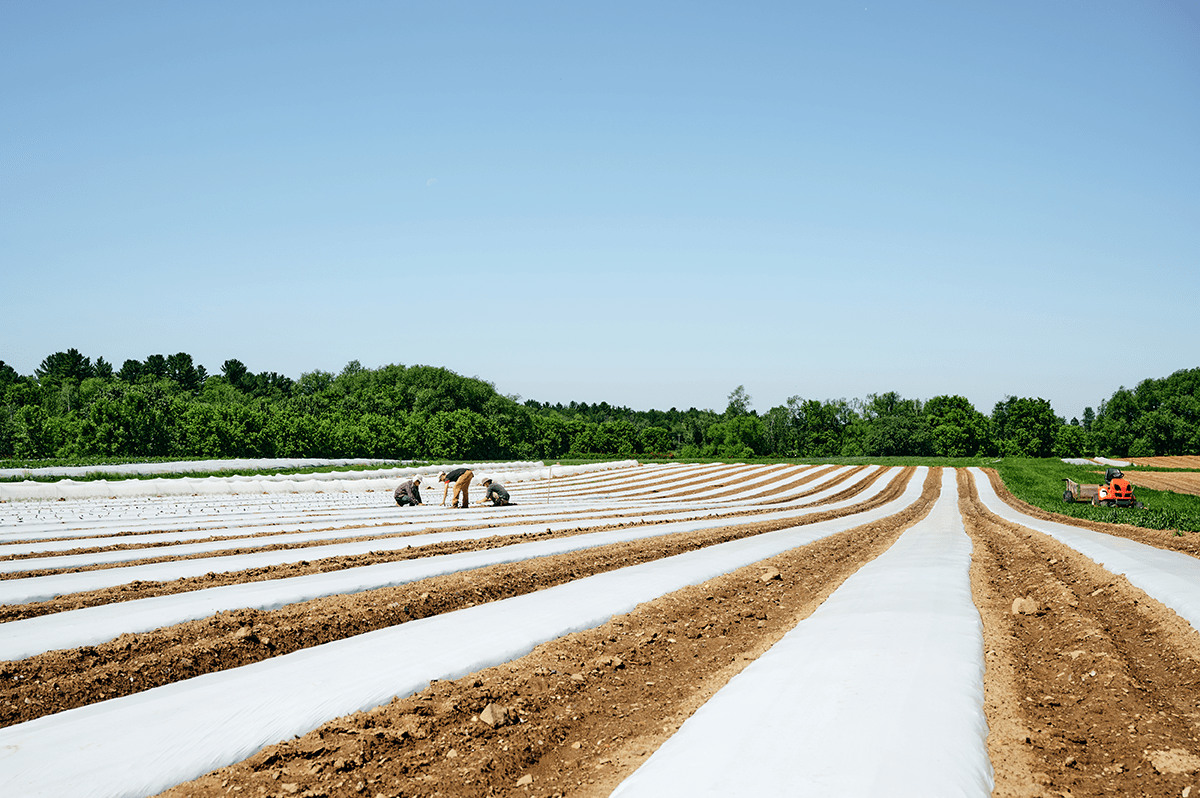 The Markets: The Icing on the Cake!

Les Jardins d’Arlington arrived at the Atwater Market in 2016 and the Jean-Talon Market in 2019. They are one of the few organic producers on the sites. “We had to learn the ins and outs of the market, lots of merchants have been doing it for generations!” says Claire. “It’s intimidating. It was a family learning experience.”

The family fell in love instantly! The market atmosphere reminds Nasser of his childhood in Algiers. “Over time, you get to build strong relationships with customers,” he says. “Once they discover who we are, what we do, and appreciate the quality of our products, they are loyal. In the spring, some of them call us to find out when we’ll be back!”

“We always get butterflies in our stomachs when we come back,” adds Claire. “The kids too, they love the market vibe.”

The producers, nourished by the contact with customers, have found a balance between baskets and markets. “We love the direct contact with the people who cook and eat our vegetables. It’s incredibly intense: we work up to 18 hours a day, but we love what we do,” says Claire. The family has huge respect for all producers, both conventional and organic.

The couple loves the markets so much that they are considering a semiretirement managing only kiosks sales. “We’re big fans of the markets, we’re 100% behind their mission,” says Claire. “For us, the markets are the icing on the cake!” 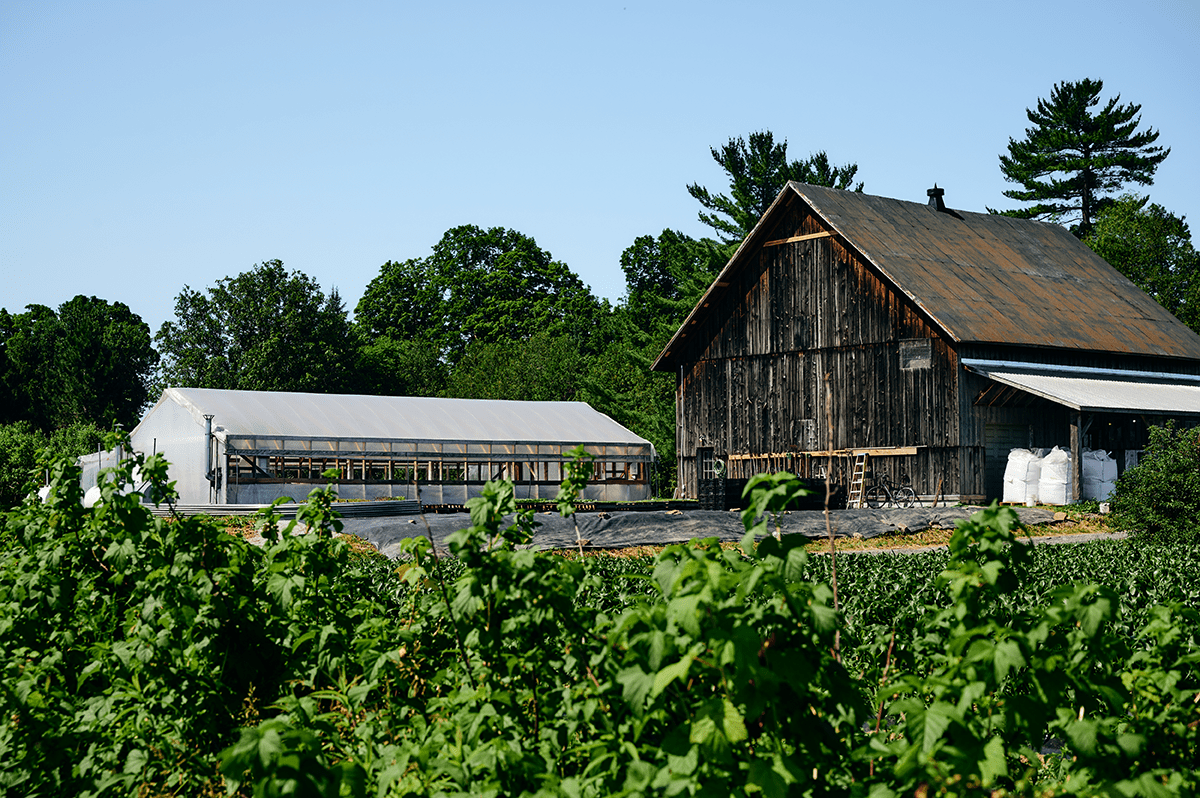 What motivates you to get up every morning?

The beautiful morning light at 5am.

Three words to describe the atmosphere at the market?

A must-have product to get at your kiosks?