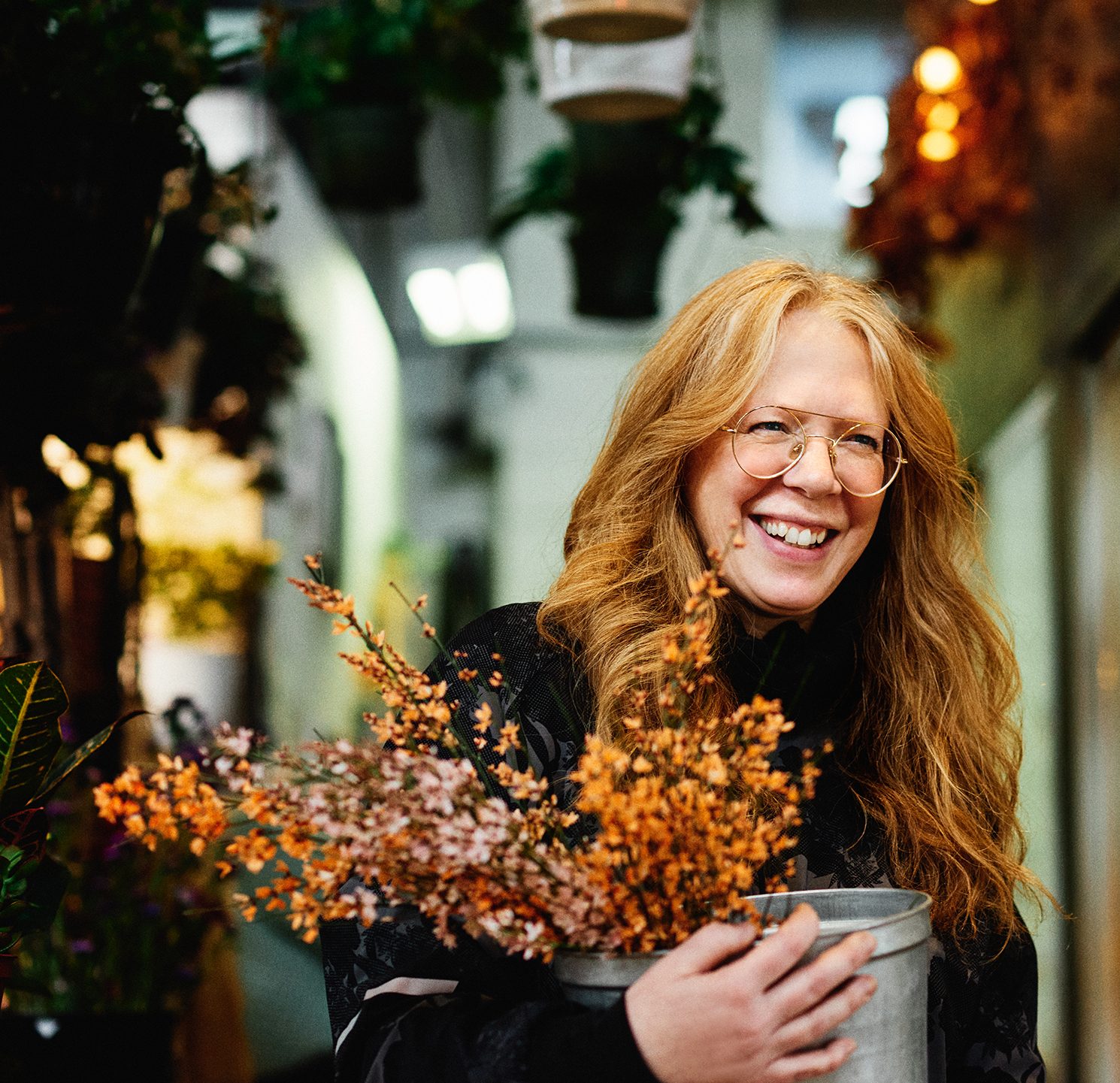 A few years ago, while still working as a graphic designer and photographer, Stéphanie Lefebvre had a moment of epiphany when she walked into a flower shop. “One day, I’ll do this,” she told her boyfriend. As the idea kept percolating, she decided to take a private course in floristry. Two years later, in June 2017, she opened La Blandinerie, a neighbourhood flower shop in Maisonneuve Market. “My grandmother’s name was Blandine. She did a lot of sewing and knitting, and was always on her knees in the garden taking care of her flowers. In the family, we created the verb to ‘blandine’ for these activities,” says Stéphanie Lefebvre, who was pleased to name her business after her grandmother. “I want her spontaneity and simplicity to shine through what I do,” she adds. At La Blandinerie, you can find not only flowers, but also plants and bouquets, all carefully arranged by Stéphanie and her team. They also offer planters, macramé decorations, greeting cards and seasonal products. Beyond all that, the florist describes herself as a purveyor happiness. “Having fresh flowers at home is one of the small pleasures in life. There’s never a bad time to bring flowers,” she believes.

A daily pleasure
While major occasions such as Valentine’s Day and Mother’s Day continue to be popular moments for giving a beautiful bouquet, Lefebvre believes that more than half of her customers, both men and women, buy flowers for themselves on a regular basis. This is one great advantage of having a shop in a public market: people come by every day to do their shopping and buy a few cut flowers on the way. The entrepreneur knows her loyal customers, takes the time to greet them, to ask for news, which contributes to her feeling of belonging to the neighbourhood and to the Maisonneuve Market. Timeless trends
Stéphanie Lefebvre has worked hard to establish her own style, and all her efforts have been worthwhile since she has now established a solid reputation in the floristry industry. Regular customers easily recognise the bouquets of La Blandinerie: sophistication, soft and sober colours, and an airy arrangement is their signature. The florist is greatly inspired by Korean arrangements: “It’s my favourite by far. It’s soft, light, airy. They don’t limit themselves to any particular flower. Rather they explore all the possibilities that shape and colours have to offer.” Among the varieties Stéphanie Lefebvre likes to use in her creations are the very popular peonies, spring tulips and carnations. Each season brings new trends and popular flowers, as well as new hybrid varieties and some local finds. “Although local flowers are sometimes more fragile, I think it’s important to offer them,” says the woman who is always on the lookout for her customers’ current fancies. 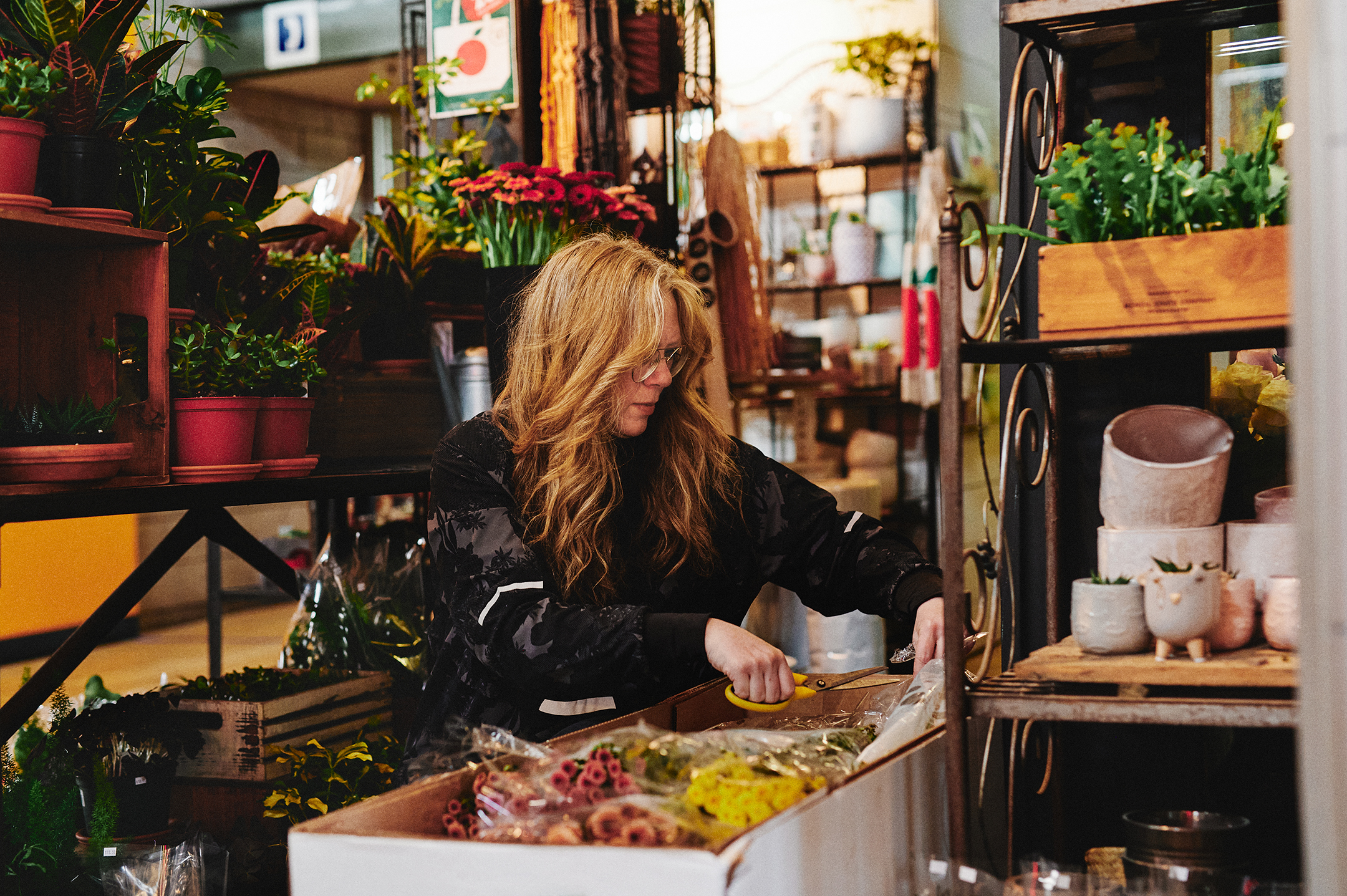 Creative, yes, but not only!
Having worked in photography and graphic design for much of her career, Stéphanie Lefebvre always had a highly developed artistic side. It was with her camera around her neck or in front of her computer editing her photos that she acquired certain qualities that are useful to her today in floristry. Things like a sharp eye for detail and a clear vision of the look she wants to give to her floral creations. While many people have a very romantic idea of the florist’s life, Stéphanie Lefebvre is keen to point out that “it’s physically very demanding. It’s so much more than just arranging flowers beautifully! You spend all day standing, with your hands in water, carrying big boxes of flowers.” Fortunately, she can count on her loyal team, a bunch of motivated and energetic girls who are always ready to lighten her load. It’s when La Blandinerie’s clients trust her imagination to create personalised bouquets that the job of florist becomes meaningful to her. “I often say that choosing a florist is like choosing a hairdresser,” Stephanie laughs. “You give them an idea of what you’d like and let them do it, knowing they have the expertise and creativity to make something beautiful.” And beautiful is what La Blandinerie is all about.

Quick Questions to Stéphanie Lefebvre
Three words to describe the Maisonneuve Market?
Convivial, human and local. Your favourite flower?
The peony. I have to admit that magnolias in springtime also give me a thrill. What motivates you on a daily basis?
The contact with my raw material, the flowers, and the energy of my team.
Text by Virginie Landry, Caribou magazine
Photos by Daphné Caron